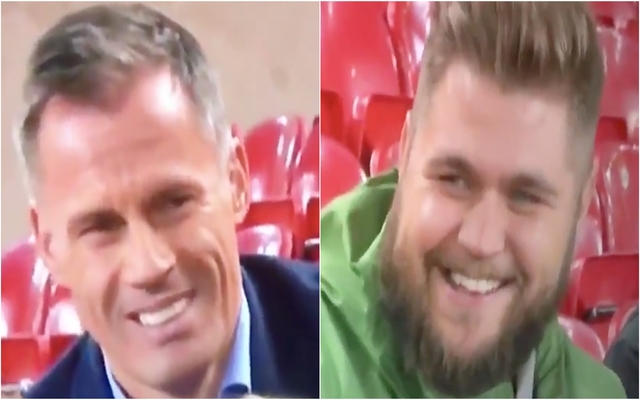 Jamie Carragher has no chill. Ahead of Liverpool’s showdown with Man Utd on Saturday, the Sky Sports pundit was at Anfield for a special countdown show.

Joined by fans from The Redmen TV and Full Time Devils, both sides discussed the game and rivalry with Carragher and Gary Neville also in attendance along with host Geoff Shreeves.

While Neville was the subject of a personal joke or two during the segment, Carragher decided to have a pop at Full Time Devils presenter Stephen Howson after he opted to bring up some of the own-goals he scored at Anfield.

“You scored a brace one year, didn’t you?” he asked. “I did, yeah, fat Russell Crowe’s son, there,” Carragher responded.

“Let’s not make this personal,” a slightly worried Shreeves adds as he ensures that things don’t go sour, while Neville notes: “I said be careful. Scousers, they’ll always go low. Lower than you will.”

Luckily, they all saw the funny side of it and based on the general reaction to the clip, it appears as though many others found it hilarious too.

However, it remains to be seen who has the last laugh on Saturday when the two old rivals go to battle on the pitch again with plenty at stake both for clubs as they will be desperate to claim all three points. For now though, let’s all just enjoy Carragher in fine form…