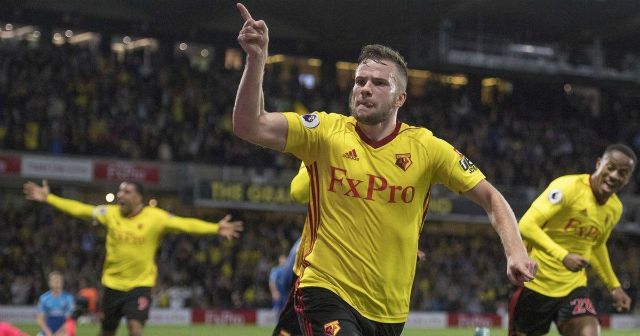 Arsenal fans have found a new scapegoat after the side’s sloppy defending allowed Watford to score a stoppage time winner in yesterday’s game at Vicarage Road.

Incredibly, footage showed Arsenal midfielder Granit Xhaka standing around and PICKING HIS NOSE as Tom Cleverley raced into the box to fire home for Watford at the death.

The Switzerland international hasn’t been at his best for the Gunners since joining from Borussia Monchengladbach last season, and his lack of work rate was badly exposed once again in yesterday’s defeat.

While fans so often jump to blame Mesut Ozil after disappointing results, it’s fair to say Gooners were agreed that Xhaka was public enemy number one on Saturday evening.

It was a goal built on an offside move, all true. But you don’t pick your nose when you leave a man unmarked inside the box#WATARS #XHAKA pic.twitter.com/4vEQlpfE5S

6:20am N I still can’t believe dat Watford’s 2nd goal, Xhaka was just watching from the edge of the area! Didn’t even move a muscle #Arsenal

Watching xhaka standing still for the goal. Had Coquelin been on the field, no way would they have had that final shot.

Xhaka picking his nose while Cleverley rifles into the goal is hilarious, what a shocking footballer pic.twitter.com/EpAGbs1XSV

Xhaka is an absolute disgrace for Watford winning goal.

Wtf is xhaka doing for Watford’s 2nd goal oh boy we do have some useless players in our team,the defending is absolute scandalous