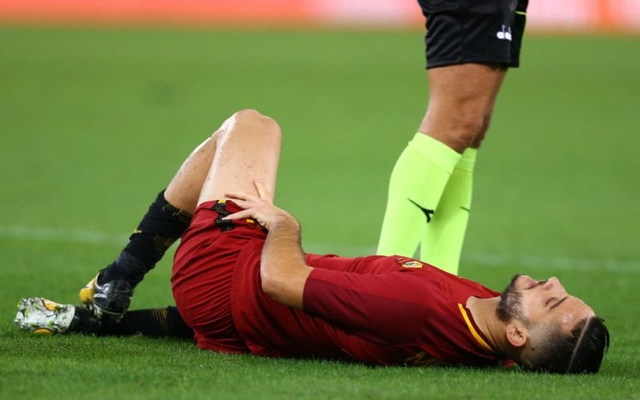 Roma will be pleased with how their Champions League campaign is going thus far, but they’ve suffered what could prove to be a very costly setback.

The Italian giants have picked up four points from their opening two games to sit behind Chelsea in second place in Group C, with Atletico Madrid three points adrift in third spot.

However, they now face a double header against Chelsea in the next fortnight, and the club have confirmed that Kostas Manolas suffered a thigh muscle injury in the loss against Napoli on Saturday night.

Sky Sports reporter Gianluca Di Marzio has gone one further by putting a timeline on his recovery, as it’s claimed that the Greek international could now face three to four weeks on the sidelines because of the problem.

Should that apply, Manolas is definitely out of Wednesday’s encounter between the two sides, while he’ll miss Serie A games against Torino, Crotone and Bologna.

However, he’ll be desperate to try and return ahead of schedule for the second meeting with Chelsea on October 31, but given the recovery period suggested coupled with the nature of the injury, he’ll have to be cautious as the last thing he wants to do is aggravate the problem by pushing too hard in training and sitting out for even longer.

In turn, Roma have seemingly lost their defensive rock who has been an almost ever-present figure in the line-up this season, and has been a highly dependable leader at the back for the Giallorossi since his arrival in 2014.

Chelsea will surely fancy their chances against a centre-half pairing of Juan Jesus and Federico Fazio who aren’t the most mobile of defenders, with the latter likely to deputise for Manolas after replacing him against Napoli at the weekend.