Just one Manchester United player gets in.

The Premier League was back with a bang this weekend, with one or two shocks as Chelsea and Arsenal fell to defeats to Crystal Palace and Watford, respectively.

And then there were less surprising incidents, such as a dull 0-0 between Liverpool and Manchester United at Jose Mourinho’s favourite bus-parking space Anfield.

But while the red half of Manchester focused on defence, Manchester City were in dazzling form to thrash Stoke City 7-2 at the Etihad Stadium to go two points clear at the top of the table.

It’s little surprise then, that four City stars made it into our Premier League team of the week…

David de Gea’s wonder-save earns him the honour of being the only Manchester United player in our team of the week. Ahead of him we have a reborn Fabian Delph at left-back, Kieran Trippier and Davinson Sanchez of Tottenham, and Liverpool’s Dejan Lovren, who actually had a solid game to keep Romelu Lukaku and co. quiet this Saturday.

Kevin De Bruyne is an easy pick with two assists in another masterful midfield display for City, and he’s joined by the rather surprising inclusion of Watford’s Tom Cleverley, who capped an impressive match against Arsenal with a well-taken late winner.

Wilfried Zaha scored a delightful winner to earn Crystal Palace their first win of the season against Chelsea, but the other names up top are somewhat more familiar: Raheem Sterling grabbed a goal and two assists for City, while his team-mate Gabriel Jesus gets in after his superb double against Stoke, and they’re joined by Tottenham’s Christian Eriksen, who hit the winner against Bournemouth.

Premier League team of the weekend in full: 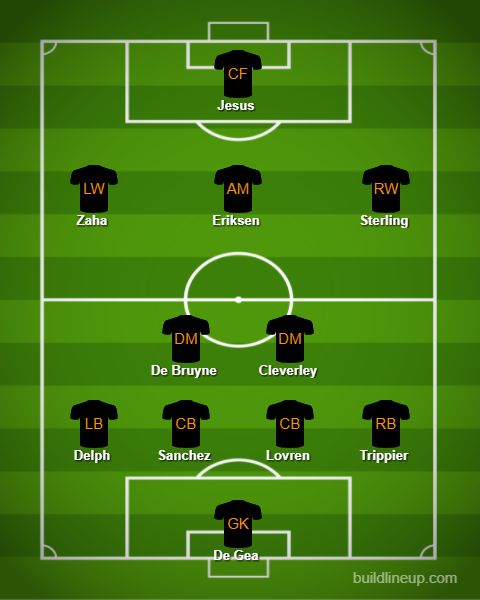