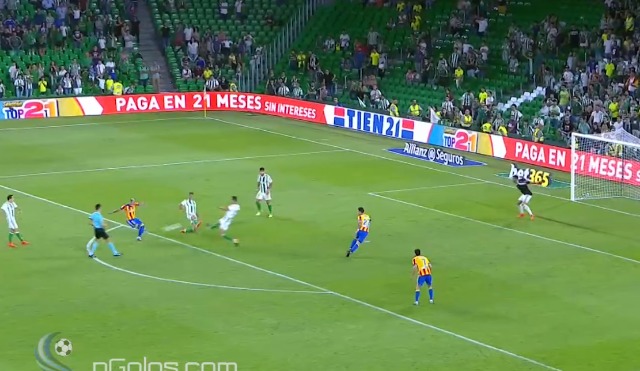 Jose Mourinho may not have been happy with Andreas Pereira’s decision to move on loan to Valencia this summer, but the Manchester United youngster is making the most of his opportunity.

Despite not being a regular for Los Che so far this term, the Brazilian certainly made an impact when brought on off the bench against Real Betis this weekend.

Showing great skill, technique and confidence, Pereira fired in a right-footed rocket after cutting in from the left-hand side to leave the Betis ‘keeper with absolutely no chance of stopping it.

United will hope Pereira can return to Old Trafford and produce that kind of form for them, with Mourinho suggesting he’d have liked to see the 21-year-old fight for his place this year.

‘Andreas Pereira was a personal decision that I don’t agree with,’ Mourinho was quoted in the Manchester Evening News in September.

‘A decision I don’t think honestly is the best decision for him, a decision that disappoints me a little bit, because I think he has the potential to be here fighting for a position, for opportunities, and fighting to be a Manchester United player.’

United could have done with skill like that this Saturday as they produced a dull performance to draw 0-0 with Liverpool at Anfield.