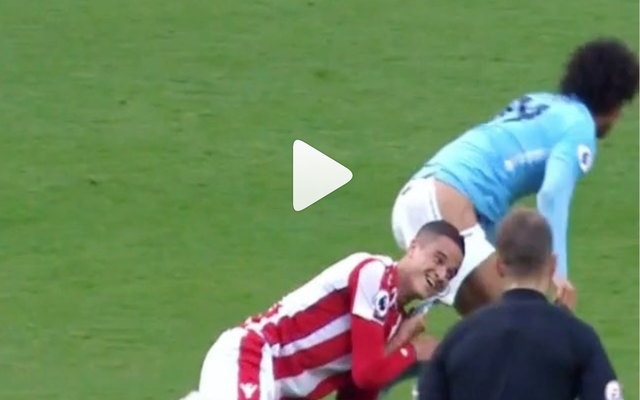 Man City star Leroy Sane was recently clocked as the quickest sprinter in the Premier League ever, as he was recorded running at 22.05 mph.

In turn, it takes a smart defender to be able to deal with him when he’s either running at you or running in behind you in order to avoid being embarrassed and we’re sure that there’s plenty of meticulous planning that goes on in training prior to facing City if Sane is set to feature.

However, if all that fails, there’s always the Afellay way. The Dutchman clearly had had enough by injury time in Stoke City’s 7-2 defeat to Man City at the Etihad on the weekend and decided he wasn’t in the mood to have a race with Sane and challenge for the ball.

Instead, as seen below, he decided that the best way to stop him was to grab a hold of his shorts and not let go. Literally. He carried out his plan with such vigour that the German international almost lost part of his kit as he could have been left pretty red-faced. Unorthodox, but perhaps effective!