Chelsea fans, one of your star players may have just taken a dig at you.

Brazilian winger Willian, who joined the club from Shakhtar Donetsk in 2014, liked a comment on Instagram from a fan who was backing the player following his average start to the season.

This was reported by the Mirror, who say that the player received criticism from fans after the Blues’ shock 2-1 defeat to Premier League strugglers Crystal Palace on Saturday afternoon, and that the like may be a potential dig at Blues fans. 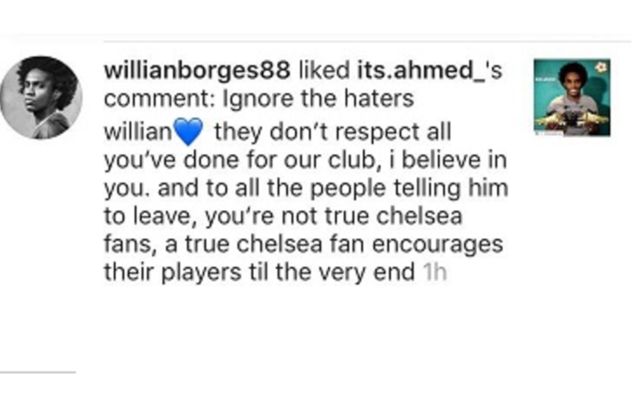 Since he joined the club three years ago, Willian has endured a successful career in West London thus far.

The former Shakhtar forward has managed to score 31 goals and bag 29 assists in 192 appearances for the Blues.

The player has also won some notable silverware during his time at Stamford Bridge, as Willian has won two Premier League titles and one League cup during his time in England so far.

SEE MORE:
Barcelona player ratings: Lionel Messi comes to the rescue to help 10-man club to a 3-1 victory
Man United player ratings vs Benfica: 8/10 England star shines, summer signing has another off-day
“It is not good for him” Klopp deals damaging blow to Liverpool star’s hope of securing midfield role

The forward endured the most successful season of his career last year, as the Brazil international scored eight goals and assisted twice in 34 league appearances, as he helped his side win their fifth Premier League title.

Despite this, the winger has endured a difficult start to this season with the Blues, as Willian’s only managed to amass two assists in 12 appearances in all competitions, and is yet to find the back of the net.

Should his performances fail to pick up as we get further into the season, maybe more fans will begin to criticise the player and give him the stick he deserves.