Barcelona could be about to get rid of one of their flops, and he may be about to secure a move to the Premier League.

Paco Alcacer, who joined the club last summer after he moved from fellow La Liga side Valencia, has attracted interest from Mauricio Pellegrino’s Southampton.

This was reported by the Sun, who say that the Saints manager has already had words with the Spanish giants over a potential transfer for the forward.

However they may not have it all their own way, as the news outlet are also reporting that Alcacer isn’t yet convinced on a move to England, which in turn has lead to Ligue 1 side Lille becoming interested in the player. 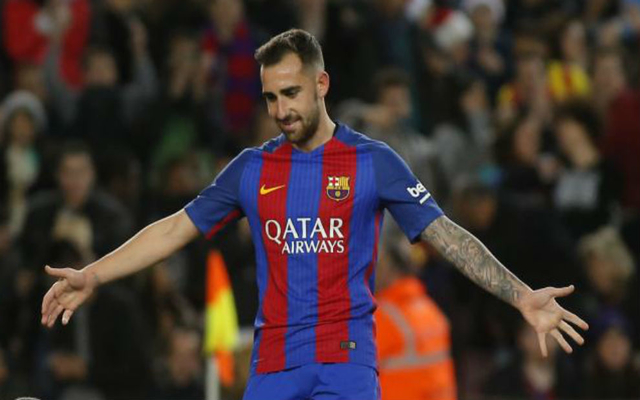 Before his move to Catalonia, Alcacer enjoyed a fairly decent spell with Los Che, as the forward managed to clock up a record of 43 goals and 17 assists in 124 games for the Spanish side.

However since his move to Ernesto Valverde’s side, the 24-year-old has failed to impress, as the Spanish international has only managed to amass a record of eight goals and five assists in 30 appearances for the club.

SEE MORE:
Liverpool’s talisman is expected to return from injury by this date, big surprise after initial assessment
Watch: Paul Scholes shows he’s United through and through with smirk at Gerrard’s lack of league titles
Chelsea open talks to seal transfer of vital player from Premier League title rivals

At first viewing this record may seem bad, however since Alcacer is having to compete with Lionel Messi and Luis Suarez, you can understand why he may not be scoring as many goals as he had done previously.

This season, the former Valencia forward hasn’t got off to the best of starts, as he’s only managed to assist once in three appearances in all competitions.

Should Southampton being successful in their reported pursuit of Alcacer, it’ll be interesting to see how the forward performs in the Premier League, and whether he can rediscover the form he displayed during his time at Valencia.