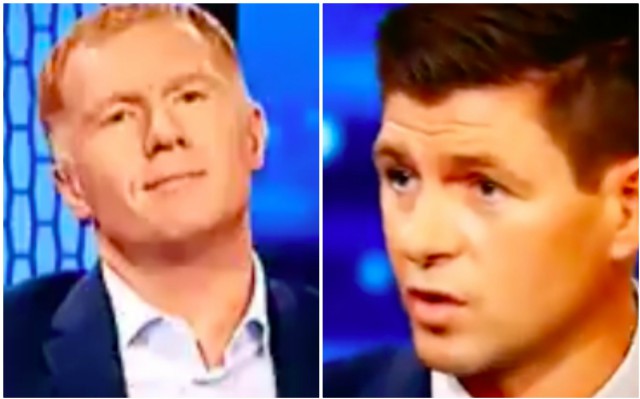 You can take the boy out of Manchester…

Speaking on BT Sport this evening, the pair were on punditry duty and, in theory at least, attempting to talk about matters of the game neutrally.

Scholes, however, clearly enjoyed remembering Gerrard’s lack of title success in all his years as a Liverpool player, with the former England man going down as surely one of the finest players to play in the Premier League but not win it.

The Reds continue to wait for their first English league title since all the way back in 1990, before the start of the Premier League era.

Scholes doing his best not to laugh at Gerrard’s lack of league titles, here. pic.twitter.com/AFyT2vp1NL

Scholes, on the other hand, won eleven of them with Manchester United, on top of a number of other major honours.

The two clubs famously enjoy a heated rivalry, and with Scholes growing up in Manchester, it’s clearly one he takes very seriously, even after the end of his playing career.