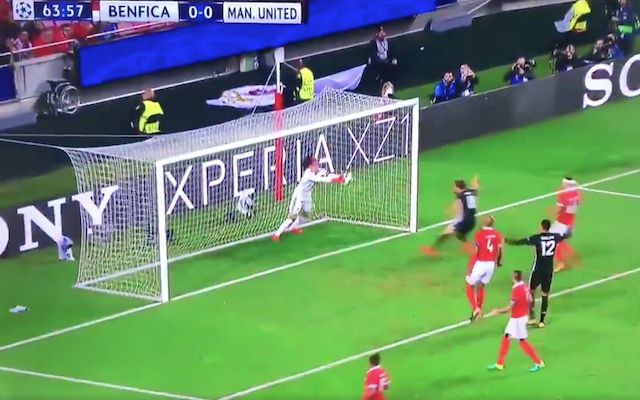 A bizarre mistake from Benfica’s 18-year-old goalkeeper Mile Svilar gifted Manchester United a 1-0 victory in their Champions League Group A game in Portugal.

At just 18-years-of-age  tonight made his first ever appearance in the Champions League as he started in goal for Benfica. However, his European debut took an embarrassing turn in the second half when he caught a tame Marcus Rashford fee-kick before stepping behind the line with the ball.

Svilar became the youngest ever goalkeeper to play in the Champions League tonight but his inexperience proved to be costly. The teenager broke Iker Casillas’ record, set during his time while at Real Madrid.

However, the youngster’s big debut will now be remembered for all the wrong reasons as he was badly at fault for Rashford’s winning goal on the night.

Rashford’s 40 yard free-kick was tame to say the least with Svilar being put under absolutely no pressure from United players when he collected the ball. However, the Belgian stepped back with the ball over his own line and despite his desperate protests to the referee could only watch on as United celebrated their lead at the Estadio da Luz.

You can watch the embarrassing moment below.