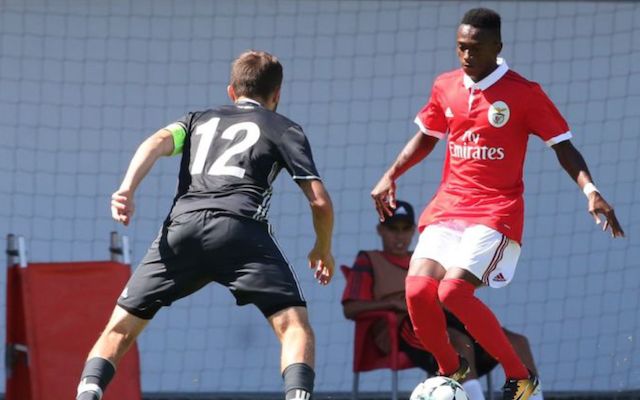 16-year-old Benfica star Umaro Embalo is reportedly wanted by Manchester United after the youngster impressed this week during an U19 clash with the Red Devils.

ESPN have reported that the teenager’s performance caught the eye of the United set-up who are now closely monitoring the youngster with an intent to bring him to Old Trafford.

Embalo came on during the second-half as the Benfica U19 side fought back from a 2-0 deficit to draw the game 2-2. The 16-year-old was instrumental in the comeback and managed to stand out despite playing alongside and against players three years his senior.

The emerging news of the Red Devils’ interest in the youngster draws many parallels with their infamous pursuit of Cristiano Ronaldo many years ago.

Ronaldo caught the eye of Sir Alex Ferguson during a pre-season friendly in 2003 as a youngster. The star was playing at Sporting Lisbon when he came up against United and impressed so much that the Red Devils felt they had to pursue a move for Ronaldo and later completed a deal for the winger after watching the then teenager terrorize seasoned pros Rio Ferdinand and John O’Shea. (As per the Mirror.)

Embalo is not the only young Benfica star that United are said to be tracking, with ESPN also reporting that the Reds are keeping tabs on Joao Felix and Joao Filipe who are just 17 and 18 years old, respectively.

It might be far-stretched to compare a 16-year-old to the likes of Cristiano Ronaldo but there appears to be numerous names in the Benfica youth set-up that are worth keeping an eye on over the coming years.