Man Utd boss Jose Mourinho has reportedly given the go-ahead for the club to step up their pursuit of Benfica left-back Alex Grimaldo.

The 21-year-old is a former Barcelona youth product but has impressed since moving to Portugal and has attracted plenty of attention with his ability to not only provide defensively solidity, but also for his attacking qualities as he is undoubtedly a modern-day full-back.

According to Record, Jose Mourinho has now ‘given the ok’ for Man Utd to swoop for the youngster, as he looks to secure a solution to his problems at left-back with Marcos Rojo still out injured with a long-term problem while Luke Shaw continues to battle fitness and form issues.

While the likes of Ashley Young, Matteo Darmian and Daley Blind have filled in admirably, a natural left-back is undoubtedly needed moving forward.

The Portuguese newspaper also ran with the story on their front-page to suggest that there is real substance behind their claims. 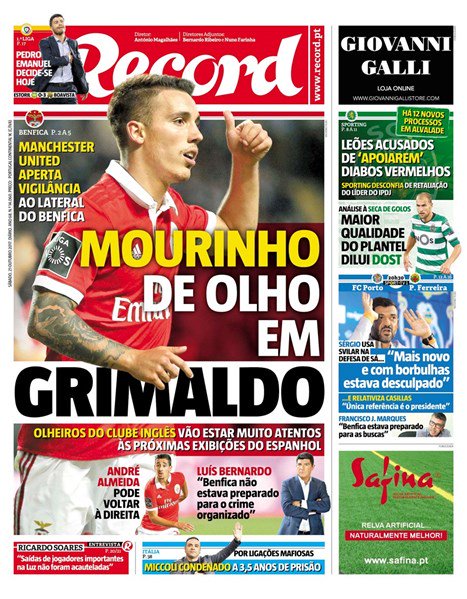 As seen in the video below, Grimaldo impressed against the Red Devils in their Champions League meeting this week, and so Mourinho would have got a first-hand look at him which seems to have convinced him over a transfer swoop.

This isn’t a new transfer rumour though, as the defender has been on Mourinho’s radar for almost a year, with FourFourTwo running a report last November on the Man Utd target, who they claim has a €60m release clause in his contract which could complicate a move to Old Trafford significantly.

In turn, it remains to be seen whether or not a deal can be agreed between the two parties with Man Utd needing to address the position sooner rather than later, as such a weakness in the backline will eventually be exposed by quality opposition.

Grimaldo perhaps lacks the experience at the top level for now, but it would appear based on the report above, that he has done enough to convince Mourinho of his talent and it could be bad news for Shaw who has failed to establish himself at Old Trafford since his move from Southampton in 2015.

As he continues to work towards full fitness, he may well be running out of time to prove himself to Mourinho if this report suggests that the Portuguese tactician is looking at other options already.

Can’t believe Barcelona sold him for €1.5m and without a buy back clause. Quality player.pic.twitter.com/01PxXfmflp