Brazilian star Alan Guimaraes has caught the eye of Europe’s elite clubs after impressing at the U17 World Cup. The Youngster has attracted transfer interest from Manchester United, Liverpool and Arsenal with Real Madrid yet to finalise an official deal for the star.

Sport Witness have cited a report from Spanish newspaper AS that a deal to bring the teenager to the Premier League is being lead by Arsenal and Liverpool with Man United’s approaches reported to be dropping off. The report states that a €50m (£45m) release clause is yet to be met by Real Madrid who are looking to secure a deal below this asking price.

The report goes on to suggest that with half of Alan’s representatives in India for the tournament and half still in Brazil, Real would be unable to strike up an official deal with the star until after the World Cup which leaves the door open for Premier League interest.

The teenager is an attacking midfielder currently playing for Palmeiras and goes by the name of Alan. He has made a name for himself at this year’s U17 World Cup in India leading the nation to the semi-finals.

Brazil will face England on Wednesday evening in the Indian city Guwahati at the Indira Gandhi Athletic Stadium following their 2-1 victory over Spain in the quarter-finals. 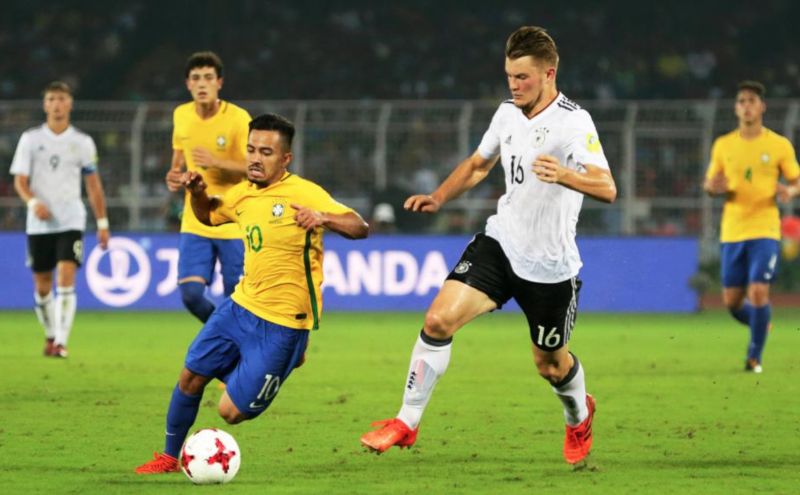 A separate report from The Sun suggested that a deal between Alan and Real Madrid has already been agreed which will see the teenager join the Bernabeu setup next year. However, the reported agreement only appears to be a verbal one which would allows for the Brazilian to make a u-turn whenever he wants.

Further, as previously mentioned Real have been reluctant to match Alan’s £45m release clause which could allow for Premier League clubs to take the lead in the pursuit of one of the world’s hottest talents if they were to trigger the clause in the Brazilian’s contract.

It remains to be seen where the future lies for the youngster and one would suspect that a great performance against England on Wednesday could lead to even greater interest from the Premier League.