Who joins Harry Kane in our team of the week?

Now that the dust has settled on a frantic weekend of Premier League action, here’s a look at those who stood out in the latest round of fixtures.

Arsenal and Tottenham arguably put in the performances of the weekend, so it’s little surprise that the north Londoners contribute five players out of the eleven we’ve gone for.

Read on to see the full XI, which we can guarantee does not include your favourite player…

In goal, who else but Tottenham goalkeeper Hugo Lloris, who produced some fine saves once again in a game that ended up being more one-sided than it could have been.

? This is why saves are just as important as assists

? 6 fantasy points well deserved for Hugo Lloris on this save!

He’s joined at left-back by Spurs team-mate Kieran Trippier, who put in a great shift and picked up an assist despite playing this unfamiliar role.

Over on the right is Cesar Azpilicueta, who bounced back from some questionable recent form to net a crucial late goal for Chelsea as they got back to winning ways against Watford.

The two centre-back spots are taken by Nicolas Otamendi and Nacho Monreal, both of whom put in solid displays for their sides and got forward to score as a nice little bonus.

In central midfield, we’ve gone for a pairing that, in their own ways, both contributed to a fine weekend for Manchester City.

Firstly, Kevin De Bruyne put in another classy midfield display for Pep Guardiola’s side, grabbing his customary assist in a 3-0 win over Burnley.

Next to him is the lesser-known Aaron Mooy, who was a star performer and goalscorer as Huddersfield Town sprung a shock victory over Manchester United.

Leroy Sane is surely going to be Player of the Year material if he carries on like this, with the young German again playing a starring role in a convincing City win.

The 21-year-old weighed in with another goal and another assist as City went five points clear at the top, making it three entrants for the league leaders in this week’s TOTW.

On the right-hand side, Pedro also grabbed a goal and an assist as Chelsea bounced back to beat Watford, with his opener an absolute beauty.

8 – Mesut Özil created 8 goalscoring chances in this match for @Arsenal; the most by a player in a @PremierLeague game in 2017-18. Maligned. pic.twitter.com/7jnLRriZ7e

In the number ten role, it has to be Mesut Ozil after his superb display was instrumental to Arsenal putting five past Everton at Goodison Park.

And of course, who else but Harry Kane up front? The Tottenham striker scored two and assisted one against Liverpool, helping Spurs to a hugely impressive 4-1 win that surely cements their status as serious contenders in this year’s title race.

Premier League team of the weekend in full 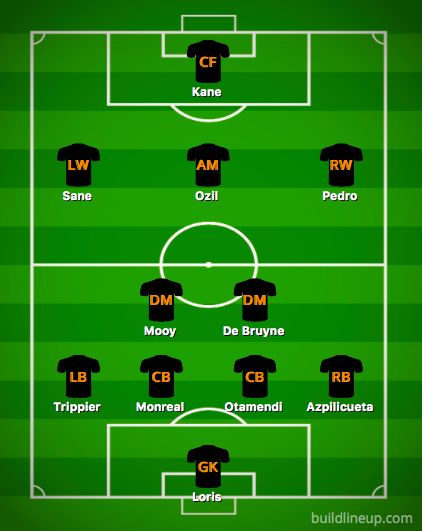