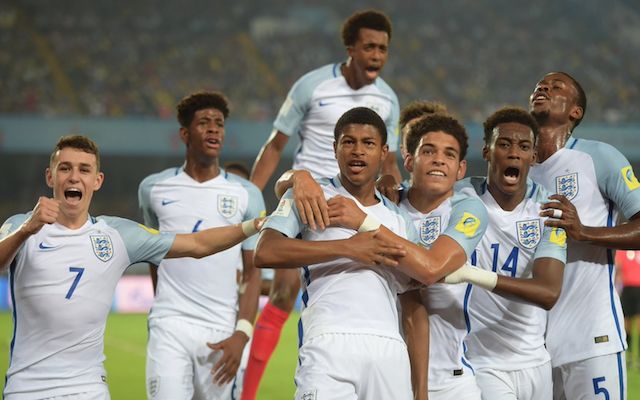 England U17s were crowned World Cup winners after a historic victory in India against favourites Spain in a goal-filled final.

The Three Lions came from 2-0 down at half-time to go on to win 5-2 thanks to goals from Rhian Brewster,  Morgan Gibbs White, Phil Foden (2) and Marc Guehi.

(Image) Astonishing moment Salford’s FCs goalkeeper is sent off for urinating on the pitch during match, twitter explodes in fantastic fashion
Liverpool 3-0 Huddersfield player ratings, stats and reaction: Firmino fires home as Reds return to winning ways
This is what Jose Mourinho said to Martial before the star came on to score the Manchester United winner vs Tottenham

Goalscorer Rhian Brewster was the man to get the ball rolling for England scoring the first goal in the incredible England comeback and has very much been the star of the tournament.

Brewster is currently a Liverpool player and scored consecutive hat-tricks in both the quarter-final and semi-final for England. The youngster is now likely to be watched by some of the biggest clubs in the world with Jurgen Klopp spoilt for choice amongst his youth ranks with Liverpool’s talented Welsh teenager Ben Woodburn also being touted by many to be the next big star in world football.

It has been an astonishing year for England with the U19s clinching the European Championship’s title alongside and the U20s also winning a World Cup. That’s now three major trophies in the space of a year for the England youth setup. The future is looking very bright indeed.

All eyes will now of-course turn to the men’s team ahead of the World Cup next summer in Russia.

However, following today’s incredible achievements it would be far too much to ask for us England fans to not get overly excited about the future. No pressure, kids.