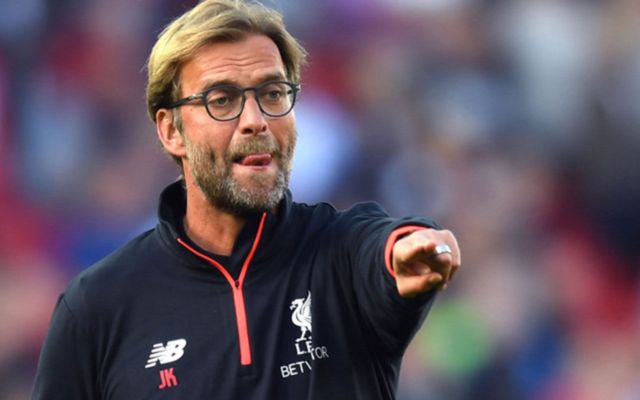 Liverpool boss Jurgen Klopp has been speaking about his side’s chances of winning the Premier League, and has made a big call on a rival.

A big problem for them has been staying tight at the back, as they’ve conceded 16 goals so far this season, 12 more than Pep Guardiola’s side, and it’s not a new problem as it hindered them last year too.

In turn, Klopp has been honest about their problems as it looks as though they face a battle to make the top four and qualify for the Champions League again.

“We know we have to improve and we know we concede too much goals,” he told SFR Sport, as reported by  The Daily Mail. “That’s 100 per cent and we don’t ignore that [but] you cannot fix the problem with one or two players. You have to do it better as a team.”

Meanwhile, he was also asked about whether or not a side could win the title by consistently playing attacking and offensive football, to which he responded with his call on who would potentially walk away with the Premier League crown this season.

“Ask Pep Guardiola at Manchester City what does he think,” he added. “At this moment it looks like they are champions in January or something but it’s not about doing it this way or doing it that way.”

City have started the campaign in ominous form and with their attacking quality and strength in depth, coupled with the early lead that they’ve carved out at the top of the table, it’s difficult to bet against them at this stage in terms of lifting the trophy.

Combine that with the fact that the likes of Man Utd, Chelsea, Liverpool and Arsenal have stuttered already this season, unless Tottenham can make a big jump and contest at the top it may be City’s title to lose.

Although, winning it in January is probably a little bit of Klopp’s sense of humour coming out as there’s plenty of football to be played many teams who will still believe in their chances of closing the gap and leapfrogging Guardiola’s men in May.