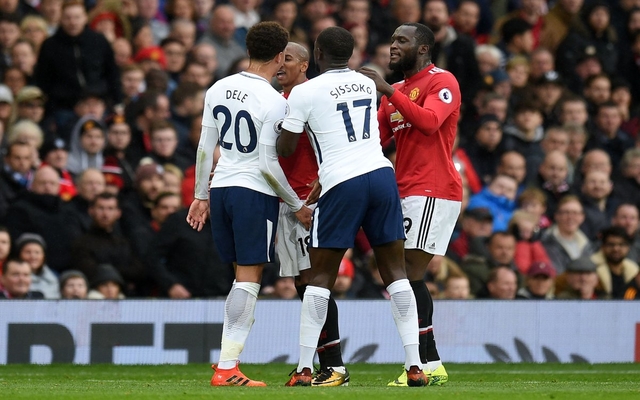 It’s fair to say that those tuning in for Man Utd’s clash with Tottenham at Old Trafford on Saturday were far from impressed with Dele Alli.

Aside from a blatant dive in a challenge with Phil Jones with the United man making no contact with him whatsoever, as seen in the video below, Alli also clashed with Ashley Young.

The pair were eventually separated before being given a talking to by referee John Moss, although their verbal exchange continued with Alli letting out a wry smile as United did their best to rile him up and force a reaction out of him.

To his credit, he managed to keep a lid on it and not let it go further to really cost his team, but ultimately it wasn’t enough to save him from the tweets below as his actions didn’t escape criticism.

With Harry Kane sidelined, Tottenham will have been looking to Alli to play an influential role in Manchester but it was a quiet affair at a rainy Old Trafford, with neither side able to break the deadlock in a tightly-contested first half.

Dele Alli when Lukaku comes to back up Ashley Young. ?? pic.twitter.com/sE8wsHB22b

When Dele Alli tries to act like a hard man #MUNTOT pic.twitter.com/kqYNU8yy3y

Another dive from Dele Alli. The guy's always cheating but he's an English player so media won't talk much about it. #MUNTOT #cheat #dive pic.twitter.com/yNVPzzddtd

Yes Gary, credit to Dele Alli for not trying to headbutt someone

What has led Dele Alli, who looks about 12 and must weigh 11st dripping wet, to always believe he's the hardest man on the pitch?

Dele Alli is the most useful nothing player I've seen. Man literally does nothing all game but then pops up with a crucial goal..

I love Dele Alli, such a little prick??