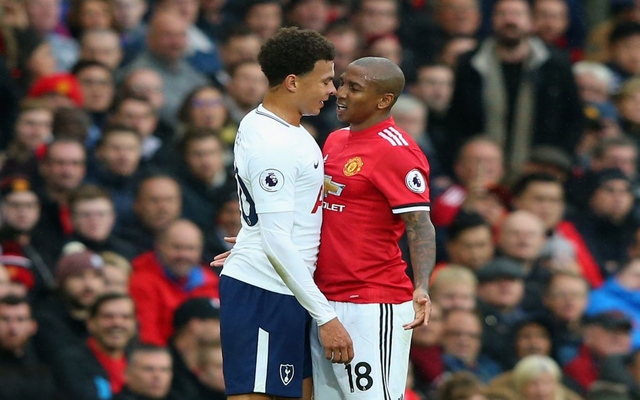 Man Utd claimed a 1-0 win over Tottenham at Old Trafford on Saturday, but in truth it was a pretty dull affair on a rainy Manchester afternoon.

Importantly for Jose Mourinho’s side though, Anthony Martial stepped up to score the winning goal in the closing stages, with the Red Devils picking up three crucial points to bounce back from their disappointment against Huddersfield Town last weekend.

Further, the win also keeps them in second place and just behind rivals Man City with Tottenham missing the opportunity to leapfrog them in the standings.

Nevertheless, one of the main talking points from the game was an altercation between Ashley Young and Dele Alli in the first half, with the pair clashing over a challenge before taking it further and having to eventually be separated by their teammates.

Referee John Moss had a stern word with the pair, but as they retreated back to their respective positions on the field, Young could be seen shouting at his rival still.

Cue the lip-readers on Twitter. One user, as seen in the first tweet below, believes that Young got very personal with Alli and asked about his mum.

However, the general consensus seems to be that the United defender said: “When you win the Prem [Premier League] let me know”.

The latter seems to be the more likely as it would be a bit uncalled for from Young to go that far to bring family into it. Nevertheless, it was pretty clear that the United players were intent on ruffling Alli’s feathers to get a reaction out of him with a number of heavy tackles flying in.

How good are your lip-reading skills? Did Young have a dig at Alli’s mum?

Ashley young saying to Dele “when you win the prem let me know” ?

Ashley young mugging Alli off “when you win the prem let me know” ?

When you win a prem let me know.

Dele Alli before and after Ashley Young said “When you win the Premier League let me know!” #MUNTOT #MUFC #THFC pic.twitter.com/0yTjKonFNb

? | Ashley Young to Dele Alli: “When you win the Prem, let me know.” ? pic.twitter.com/z7XGEtgTl1