Was this the key to United’s win over Tottenham?

Manchester United manager Jose Mourinho has explained why he felt replacing Marcus Rashford with Anthony Martial could give his team what was needed against Tottenham yesterday.

The Red Devils gained a hard-fought 1-0 win over Spurs with Martial coming off the bench to score a late winner in what could prove a crucial goal in this season’s title race.

Speaking after the game, Mourinho discussed Martial’s attributes and how he felt his superior link-up play to Rashford could be the key to finally breaking a stubborn Tottenham side down.

‘Same position as Marcus but more comfortable dropping in between the lines to have the ball and to try to drive the ball, not just to attack space,’ Mourinho was quoted in the Metro.

‘I was telling him to do that but at the same time to play from Lukaku, against three very good central defenders, but three central defenders who had a hard match for 60, 70 minutes against Lukaku and Rashford. 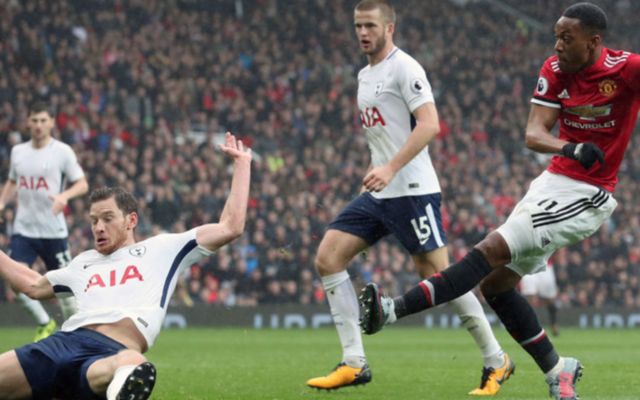 ‘So he comes, okay, probably a lucky shot, but the movement is good, the desire is good, and the goal is the goal that give us two more points than the 0-0.’

Rashford has largely been preferred to Martial in United’s attack this season, but it’s clear Mourinho sees the Frenchman’s value in this squad.

The Daily Mirror recently linked Martial with a shock possible move to Arsenal, but United will surely not allow such a talented young player move to a major rival, even if he isn’t always first choice.

The 21-year-old has had a number of impressive outings as an impact sub, just as he did yesterday to hand his side a hugely satisfying win over a major title rival.