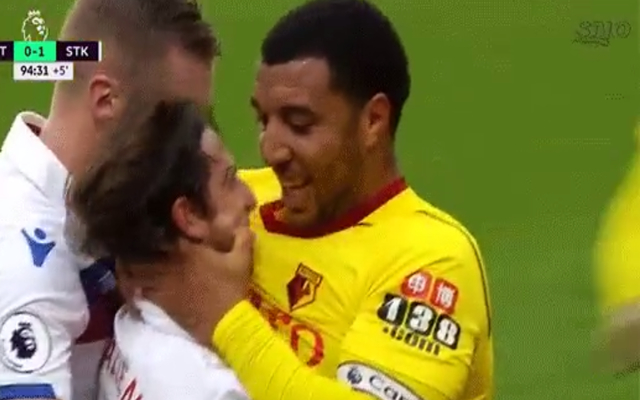 The pair were involved in a nasty confrontation as after expecting Watford to put the ball out of play due to an injured player being down, Deeney opted to try and cross it in instead.

Allen wasn’t impressed, but after both he and Ryan Shawcross went over to the Watford forward, with the latter appearing to push his head into Deeney’s face which may well be a separate matter, Deeney then proceeded to grab Allen by the face, as seen in the video below.

Somehow, the 29-year-old escaped a red card as the referee merely brandished a yellow to both players, and so he can consider himself a lucky man to have stayed on the pitch.

However, it remains to be seen whether or not further action is taken as although he was reprimanded for the incident at the time, the FA will surely be having a closer look and making a phone call.

There’s simply no excuse for that kind of behaviour, and the Twitter users below have certainly let Deeney know it with some Arsenal fans getting their own back after his ‘cojones’ outburst on BT Sport earlier this month after their win over the Gunners, as reported by The Independent.

Deeney. What a cunt. pic.twitter.com/rtXcmH1iZJ

Troy Deeney is a disgrace! pic.twitter.com/bIhGCTvkBe

Yo Troy Deeney is a psychopath. Man was bout to buss Joe Allen head like a grape and grinning like its a joke ting.

Ever since Troy Deeney insulted the Arsenal players we have won every game and Watford haven’t won a raffle ?

Awful from Deeney this. Get your hands off wee Joe ? pic.twitter.com/WihfmE1EcW

Expect Deeney to be banned the next 3 games after his altercation with Allen. Okaka surely has to get a look in if so.

I reckon coming back from 1-0 down to win 3 times in a week shows massive cojones… what do you think @T_Deeney ?? ??#Arsenal