Here’s our pick of the Premier League stars in action over the weekend.

It was business as usual in the Premier League this weekend as Manchester United and Liverpool got back to winning ways, while Chelsea, Arsenal and Manchester City had stand-out performers once again.

Pep Guardiola’s side look like running away with this Premier League title, so it’s little surprise to see three City stars earning places in our team of the weekend.

READ MORE
Football Manager 2018 wonderkids: Arsenal, Liverpool and Tottenham starlets among top-rated players aged 18 or under
Arsenal prepare January transfer window bid for emerging midfielder who looks a gem based on Football Manager 2018 stats
Lads, they’re still Tottenham, Mourinho is a child & Arsenal made the signing of the summer: 5 knee-jerk reactions to the weekend action

Here’s our run through of this week’s top performers, including a place for our hero of the weekend Sead Kolasinac, who is officially on his way to becoming one of the best free transfers in history.

In goal, Thibaut Courtois had to be at his best for Chelsea to come away with a hard-fought win and clean sheet away to Bournemouth – he certainly fared better than his former Blues team-mate Asmir Begovic on the other side, anyway.

Elsewhere in defence, Kyle Walker had another strong game at right-back for City, picking up an assist. On the left, Kolasinac is an obvious contender after scoring and assisting in Arsenal’s 2-1 win over Swansea.

As for the two centre-backs, Chris Smalling stood out in a solid display for Manchester United as they gained a crucial win over Tottenham to bounce back from last week’s setback at Huddersfield. Alongside him, David Luiz put in an assured display alongside Courtois to help Chelsea keep things tight against Bournemouth.

With a goal and an assist to his name to continue his fine start to the season, Fernandinho’s revival goes on as he earns a spot for his role in Manchester City’s 3-2 win at West Brom.

Alongside him, Aaron Ramsey had another influential game for Arsenal and the Welshman takes the second central spot here, scoring for the second week in a row as he looks to get back to his best. 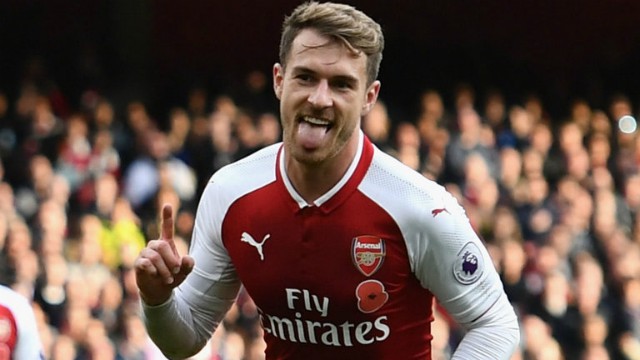 After a dazzling display for Leicester City against Everton, Demarai Gray will feel he’s earned his place in the team of the week after a frustrating time at the King Power Stadium so far. Finally showing what he can do, he’s alongside some big names in our front four.

Eden Hazard also makes it in after his winner at Bournemouth, and Leroy Sane had another superb week with a goal and an assist in City’s win at the Hawthorns.

Finally, we’ve gone for Roberto Firmino up front after his pivotal role in getting Liverpool back to winning ways with their 3-0 victory over Huddersfield Town. The Brazilian was a contender for Man of the Match and just needs to produce performances like this more often to be considered the real deal at this level.

Premier League team of the weekend in full