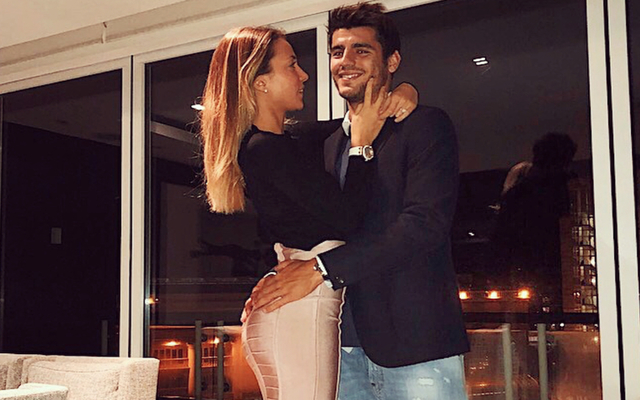 Chelsea striker Alvaro Morata gave fans a fright on Monday morning, but after clearing up his comments, wife Alice Campello has cheered him up.

In an interview with La Gazzetta dello Sport, the Spanish international suggested that he wasn’t entirely content with living in London as he spoke about his happiness of being in Italy and his future plans of moving back to Spain when he starts his own family.

Naturally, that’s not what Chelsea wanted to hear from their marquee signing of the summer, but speaking at the press conference ahead of his side’s clash with Roma in the Champions League on Tuesday night, Morata moved to clear up his comments as they clearly didn’t reflect what he meant.

“If Chelsea proposed 10 years, I’d probably sign it,” he said, as per BBC Sport. “I’m happy with everything. If I make good and improve, I can stay here more than five years.”

“When I say London is a stressful city, I’m talking about the traffic and a lot of people. It’s an incredible city. I’m really happy here and enjoying London with my wife.”

Speaking of his wife, we’re pretty sure he’d enjoy life anywhere if Alice Campello is accompanying him, and although the photos were likely to have been taken over the weekend as Morata is now in Rome for the aforementioned showdown with Roma, he looks pretty happy in the image below.

Although he did hint that Campello was also struggling with settling into life in London, you wouldn’t be able to tell from her Instagram snaps as she continues to sizzle and looks as though she’s taken to England well while setting up her own YouTube channel and looking to get her own ambitious ideas off the ground.

Long may the pair remain in London as Chelsea fans will want to see Morata stay at Stamford Bridge having impressed early on with seven goals and three assists in 13 appearances in all competitions.

Meanwhile, who doesn’t want to see more of Campello? She may well be the hottest WAG in the Premier League…

An Italian in London ?? ?? #beitalian