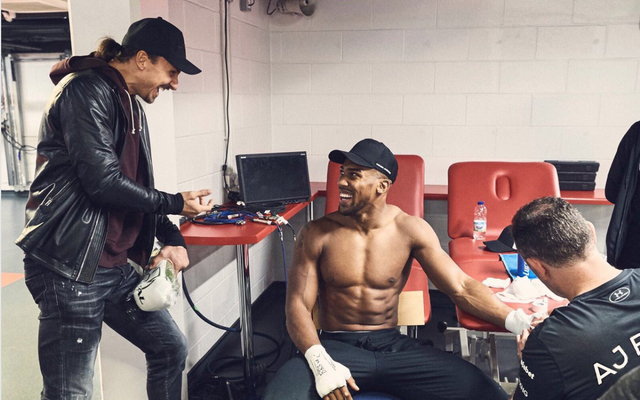 Zlatan Ibrahimovic has provided us with plenty of memorable moments both on and off the pitch, as his wit certainly matches his football abilities.

The 36-year-old was in Cardiff at the weekend to see Anthony Joshua successfully defend his heavyweight titles against Carlos Takam, while he was also seen in the Brit’s dressing room before he entered the ring.

Joshua has since revealed details of their conversation and has shared the advice that the Swede offered him, and it was typical Ibrahimovic talk.

From the man who has given us countless classic lines over the years, he pulled Joshua up on something as he seemingly wants him to be less humble.

“Zlatan loves his boxing and his mindset is phenomenal but he picked me up on something I said after my fight with Wladimir Klitschko earlier in the year,” Joshua said, as reported by Sky Sports.

Having enjoyed himself in Wales at the weekend, Ibrahimovic will now continue to focus on regaining full fitness and recovering from the knee injury that has sidelined him since last season.

Man Utd will undoubtedly be waiting for his return, as although Romelu Lukaku has started life at Old Trafford well, the addition of a world-class individual like the former AC Milan and Barcelona star will be a boost for all concerned as the Red Devils look to compete on various fronts.

Failing that, it sounds as though Ibrahimovic is ready to teach Joshua some new skills if he wants to learn a different trade…

Ibrahimovic: “Joshua’s the man. If he wants to learn some Bruce Lee skills, I can learn him.” ? #mufc [@IFLTV] pic.twitter.com/hJQzAJ4L1d