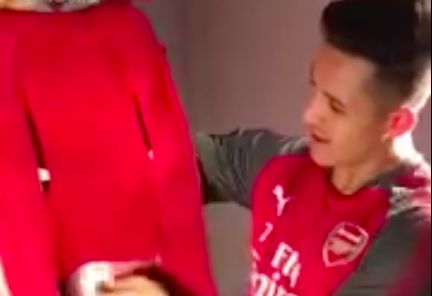 Sanchez won’t get this kind of love at Manchester City!

Arsenal treated Alexis Sanchez to a very special Christmas present, showing the Chilean precisely the kind of generosity and thoughtfulness he’ll find hard to get anywhere else.

The Gunners may have been unable to persuade Sanchez to accept their offers of a new contract, but he was never going to turn down a pair of Christmas jumpers designed specifically for dogs!

The 28-year-old is known to show his love for his two pets Atom and Humber on his Instagram account, with Arsenal fans even erecting a banner at the Emirates Stadium in their honour earlier this year, as noted by the Metro.

Now Sanchez can make sure his dogs stay warm over the festive period, with Arsenal really going out of their way to make their want-away star feel loved.

We surprised @alexis_sanchez with a gift for Atom and Humber – Arsenal Christmas dog jumpers ?? ????

The Daily Mail recently reported that Manchester City were likely to come back in for Sanchez in the January transfer window after Arsenal’s failed efforts to keep him in north London.

It remains to be seen if City are preparing for Sanchez’s arrival with their own special branding of dog jumpers, but they’ve certainly got their work cut out for them after Arsenal raised the standards with this gift.