For the most part, Jose Mourinho has often enjoyed a close relationship with his players. It seems that applies to one Chelsea star in particular who has revealed they still talk.

Having given him his breakthrough at Real Madrid and worked together in the Spanish capital, it’s only natural that Mourinho would have developed a close bond with Alvaro Morata.

SEE MORE:
‘He should sit down and shut up’ – Jose Mourinho blasted by Sky Sports guest

The 25-year-old has gone on to establish himself as a top striker as a result, but will be plotting the downfall of Mourinho’s Man Utd on Sunday when the two sides meet at Stamford Bridge.

While this may raise a few eyebrows for some in that Morata is talking to a rival manager, it’s clear that he values having his former boss still stay in touch, but he made sure to make clear that ultimately he sees Mourinho very much as a rival on the pitch now given their current allegiances.

“We speak, not only this summer. I have a good relationship with Jose. He was my first coach in professional football and he gave me the chance to be a professional,” he told the Daily Mail.

“He made me the first contact. Sometimes we send messages, not speaking about football, asking if everything’s OK and sending some jokes. It’s good and I appreciate these things because he was my first coach but now he’s my rival.”

Morata spent two years with Juventus where he really found his feet having been given an opportunity to play an important role on a regular basis, as he scored 27 goals in 93 appearances in all competitions.

Antonio Conte was in charge when he was signed from Real Madrid, but the Italian tactician left that same summer to go on and become the Italy boss, and so they missed out on the opportunity to work together.

However, three years later and they’re finally on the same side at Chelsea, and Morata has revealed how crucial his boss was in convincing him to move to west London, while he’s now got what he was craving for all along in the sense of being the top choice up front of which he was denied in Madrid.

“I came to Chelsea for Conte. For the first time in my career I feel like the number one striker in a team. This is what I needed.”

In turn, while he may well be messaging Mourinho still, Chelsea have nothing to worry about other than focusing on bridging the gap between themselves and their rivals at the top of the Premier League table, and Morata will be a huge part of that in firing them to better results. 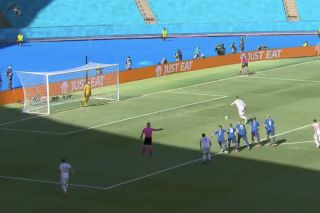