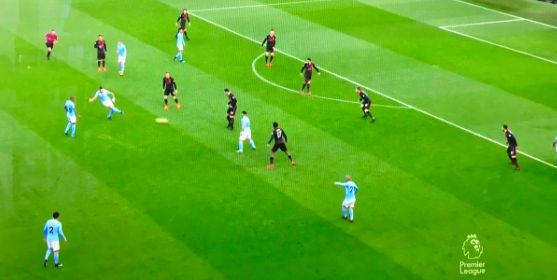 Thought Arsenal played football the way it was meant to be played?

A screen grab of Arsenal attempting to keep out Manchester City today sums up just how far they’ve fallen in recent times.

Powerless to deal with the superior build-up play of Pep Guardiola’s side, Arsene Wenger has often found himself with everyone except Alexis Sanchez behind the ball at the Etihad Stadium.

Arsenal will not be favourites to get anything from this game after City’s blistering start to the campaign, and already found themselves 1-0 down after 19 minutes.

Still, back in the day you could at least count on the Gunners to produce some ambitious football, whereas now they seem unable to go toe-to-toe with this City side.

In fairness, Guardiola has looked like doing Wengerball better than Wenger ever since he started his managerial career with Barcelona in the 2008/09 season, but it’s particularly humiliating for the Arsenal manager to now come up against it here in England, which has so long been his turf for stylish attacking football.

Predictably unsuccessful given the personnel, but we’ll presumably be hearing about Arsene Wenger parking buses at Manchester City. #MCIARS pic.twitter.com/NXGIzZeK4s

Annoying as Duncan Castles may be for his relentlessly pro-Mourinho agenda, he has a point here in that Wenger probably won’t get the same kind of stick as the Special One here despite clearly also ‘parking the bus’ in a big game.

Wenger renewed his contract with Arsenal in the summer, but many fans will be tearing their hair out at the club’s board for continuing to show faith in a manager who has not delivered a league title since 2004.

Three FA Cup wins in the last four seasons have helped keep the 68-year-old in a job, but the truth is they have long been second-best in big games such as this one.