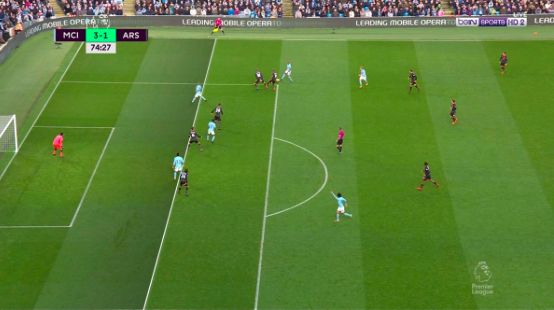 Maybe it wouldn’t have mattered anyway, but Manchester City certainly got a huge slice of luck on their third goal against Arsenal today.

As pictures after Gabriel Jesus’ strike show, David Silva was clearly offside in the buildup as he then squared for the Brazilian striker to more or less kill the game.

This came just as Arsenal looked to be getting back into it at the Etihad Stadium, with Alexandre Lacazette coming off the bench to halve the deficit in the 65th minute.

Of course, this is Arsenal, and they have been distinctly second-best for much of this game today, but things can change quickly in football and Lacazette’s goal gave them a fighting chance.

Still, any of that faint hope was killed by some sloppy officiating here, with Silva taking advantage of that extra half-yard he gained on the Arsenal defence.

RT if you think video referee is needed in the Premier League pic.twitter.com/QIkvD6dTWT

Big games can be decided on narrow margins, and it hasn’t gone Arsenal’s way today as Pep Guardiola’s side will surely now go on to collect all three points to maintain their title charge.

Arsenal, meanwhile, will miss the chance to potentially pick up a morale-boosting draw against a tough opponent and continue to scrap it out for little more than a top four spot for the rest of this season.