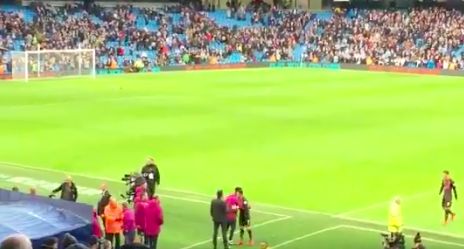 In case you’ve been living under a rock for the last six months, Arsenal’s Alexis Sanchez is heading towards the end of his contract and looks likely to be on his way to Manchester City.

BBC Sport reported that City failed with a deadline day bid for the Chilean in the summer, with the Daily Mirror recently reporting that he’s likely to move to the Etihad Stadium on a free transfer next year.

So all eyes were inevitably on Sanchez today as he played for Arsenal against City – who look most likely to be his future club, despite some reports of interest from elsewhere.

Bayern Munich are also admirers of the former Barcelona man, so say Don Balon, while Diario Gol have today linked Real Madrid with an interest in him in January.

Still, body language experts may want to take a look at Sanchez embracing City coach Mikel Arteta here at the end of today’s defeat to City.

Big hug between Arteta and Sanchez as the Arsenal man heads for the changing room. pic.twitter.com/7jCvbPyToA

Sanchez could not prevent Arsenal losing 3-1 to Pep Guardiola’s side, with the Gunners once again looking well below par in a big game.

The Chile international started up front for Arsenal, and while he was not at his most impressive on this occasion, City fans may be encouraged to see him getting friendly with Arteta afterwards.

City already boast one of the best attacks in Europe with the likes of Sergio Aguero, Gabriel Jesus and Raheem Sterling in top form this season, but the addition of Sanchez could make them absolutely unstoppable.

The 28-year-old scored 30 goals for Arsenal last season, almost single-handedly giving them a fighting chance of a top four spot, even though they ultimately missed out on the final day.