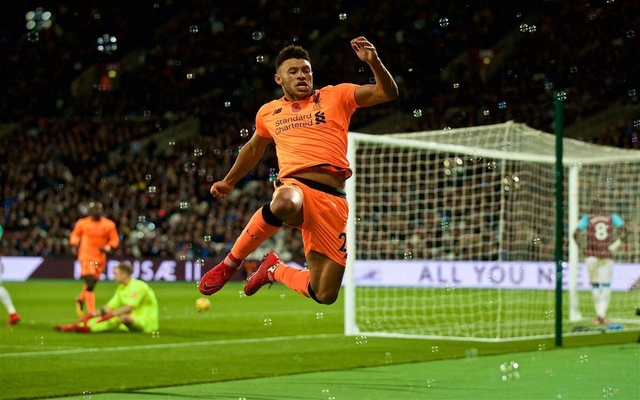 Liverpool ace Alex Oxlade-Chamberlain hasn’t had the best of starts to life at Anfield, but things are certainly looking up for him.

The 24-year-old has made 12 appearances in all competitions, most of which have come off the bench which was an issue for him at former club Arsenal.

However, he was given the nod by Jurgen Klopp in his starting line-up against West Ham United on Saturday, and the England international responded with a crucial goal in their 4-1 win over the Hammers.

Liverpool fans were clearly delighted for him and continue to back him as they do with all of their players, and as seen in the video below from Paul Philbin on Twitter, they were in fine voice on their way back from London singing Oxlade-Chamberlain’s name.

It’s their take on Celtic’s song for Stuart Armstrong, which can be found below too, while there are bound to be various other versions across the country. Regardless, the Liverpool man will undoubtedly love seeing this, while his better half, Little Mix’s Perrie Edwards, also gets a shout out in the song too.

As noted by The Daily Mail, the pair have been dating since January, and so it looks as though Oxlade-Chamberlain is doing well on and off the pitch!