It’s Monday, and that means it’s time to delve into Garth Crooks’ world and dissect and analyse his Premier League team of the week.

As ever, he’s courted some criticism on social media with his selections and snubs, but on the whole he’s been relatively fair in terms of looking beyond the top six and around the league to assemble his line-up.

Nevertheless, it still has a Chelsea theme to it, with N’Golo Kante and Eden Hazard selected in midfield, while goalscorer Alvaro Morata gets the nod up front after sealing the win over Manchester United at Stamford Bridge on Sunday.

The Spaniard now has eight goals in 15 appearances in all competitions so far this season, and he is undoubtedly a key figure in Antonio Conte’s side not only with his goals, but also for what he offers in the build-up of play with his ability to link things up. His brilliant header to separate the two sides on the weekend though would have been a defining factor for Crooks.

Meanwhile, it’s no surprise that Liverpool winger Mohamed Salah is also included, as his brace helped down West Ham United in a 4-1 win for the Reds.

The Egyptian international has been in stunning form since his summer arrival at Anfield, scoring 12 goals in 17 outings. In turn, with Leicester City’s Riyad Mahrez on the other side of the front three after his performance in the draw with Stoke City, it’s a dangerous-looking attack.

Man City’s Kevin De Bruyne is unsurprisingly back in the mix as he was crucial again, this time in the win over Arsenal as he grabbed the first of three goals and was influential throughout, while Huddersfield Town midfielder Rajiv van La Parra completes the four in the middle.

It’s a bit of a contentious pick as Crooks basically admits that he’s chosen him for his goal, which was a wonderful strike by the way. However, is that really enough to warrant a place in the team of the week?

Burnley goalkeeper Nick Pope is between the posts as he made some key saves against Southampton, while Steve Cook, Shane Duffy and Lewis Dunk make up a back three as they played key roles in helping Bournemouth and Brighton keep impressive clean sheets at Newcastle and Swansea City respectively.

In turn, Crooks has earned some flak on Twitter again, and while you can question some of his selections, it’s all about opinions and that inevitably leads to disagreements. What do you make of his selections below? 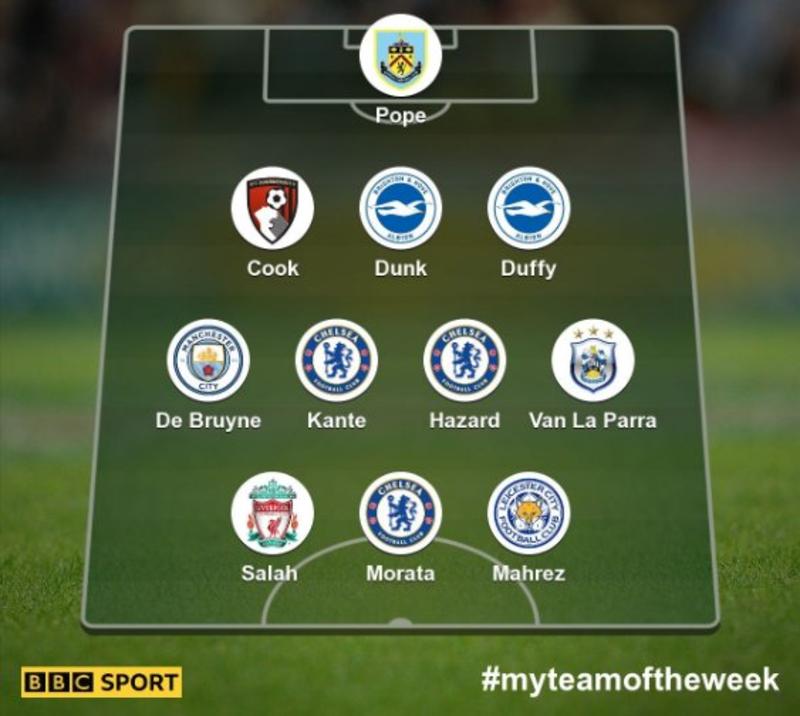 As always, his adoring fans had a view on his team of the week to make for some hilarious reading…

Do @BBCSport ever read these comments?!?! The same every week. Sad to think our license fee is paying a wage for that man!!

This guy is pure rubbish! Average footballer commentate on game he is out of depth #garthrubbishpundit

Premier League Player of the Season confirmed
May 21 2022, 14:23
Liverpool FC
Thomas Tuchel puts Chelsea disappointments down to one player
May 20 2022, 9:43
Chelsea FC
What Jurgen Klopp has said about Liverpool injuries ahead of Wolves clash
May 20 2022, 7:13
Liverpool FC
Video: Neville and Carragher disagree over three Liverpool players’ places in team of the season
May 17 2022, 14:13
Liverpool FC
Klopp strengthens Liverpool backroom team due to worry ahead of crunch end-of-season fixtures
May 16 2022, 12:36
Liverpool FC
Premier League team of the week: Liverpool duo in after FA Cup win, plus Spurs & Leicester stars
May 16 2022, 5:51
Liverpool FC
Erik ten Hag eyeing surprise transfer of Chelsea star to fix problem position at Man United
May 15 2022, 7:08
Chelsea FC
Mohamed Salah appears to confirm he’ll be fit for Liverpool’s Champions League final clash vs Real Madrid
May 15 2022, 6:42
Liverpool FC
Carlo Ancelotti speaks out on Eden Hazard future amid Arsenal interest
May 14 2022, 15:15
Arsenal FC
Liverpool superstar set to make compromises and sign huge new deal with the Reds until 2026
May 14 2022, 7:54
Liverpool FC