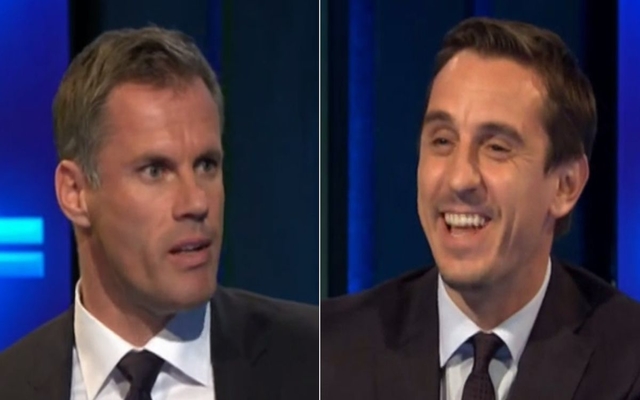 They’ve established themselves as top analysts and pundits since hanging up their boots, but Jamie Carragher and Gary Neville also keep us laughing.

The former rivals have been real assets to Sky Sports, whether as part of their Monday Night Football coverage or as studio pundits or co-commentators.

In an industry filled with former players who are giving punditry a go, these two have certainly made their way to the top of the list in terms of most popular or at least most talked about.

However, their rivalry hasn’t entirely ended as neither misses an opportunity to take a pop at each other and this time it was Sky Sports who gave them the ammunition to fire a shot at the other.

The broadcasting giant wrongly showed a graphic next to Carragher during their coverage at the weekend suggesting it was Neville speaking, as seen in the tweet below, and the former couldn’t help himself but to take to Twitter and poke fun at his colleague.

No one grows up & wants to be @GNev2 ? pic.twitter.com/Jd1WfksmIv

It goes back to an earlier exchange that the pair had which left us all in stitches during which Carragher insisted that “no one grows up wanting to be a Gary Neville”, as seen below.

Sky Sports have made it easy for him this time, but it’s still hilarious nonetheless…