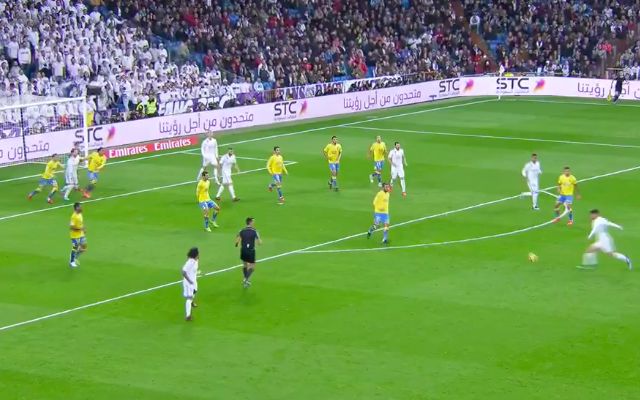 That’ll bump his price tag up a little more!

Manchester United fans may want to take a look at this beauty of a strike from one of their rumoured transfer targets in yesterday’s Real Madrid game.

Marco Asensio was on target with a sublime half-volley from outside the box, scoring the second in a 3-0 victory over Las Palmas at the Bernabeu.

This follows recent speculation from Diario Gol that Jose Mourinho is a huge fan of the player and ready to offer Marcus Rashford to Real in a surprise swap deal so he can bring him to Old Trafford.

Before last night’s game, another report from Diario Gol also claimed Asensio was not happy with his current role in Zinedine Zidane’s side, having struggled to win a regular place in the starting XI this season.

Well, Zidane will surely have been impressed by this strike, even if it does only intensify United’s interest in the talented 21-year-old.

United and Real Madrid have done a fair bit of business in recent years, with the likes of David Beckham, Ruud van Nistelrooy and of course Cristiano Ronaldo moving to the Bernabeu, while Angel Di Maria swapped Madrid for Manchester in 2014.

Asensio looks another who could be involved in a transfer saga between these European giants, unless he can quickly win over Zidane and start to feature more regularly for Los Blancos.

However, he continues to face plenty of competition in Real’s attack, with the likes of Cristiano Ronaldo ahead of him in the pecking order despite not yet hitting top form this season.