Liverpool were in the mood for a trip down memory lane on Tuesday as they celebrated their 8-0 win over Besiktas which happened 10 years ago today.

Yossi Benayoun grabbed a hat-trick on the night in their Champions League encounter at Anfield, with Peter Crouch, Steven Gerrard and Ryan Babel also getting on the scoresheet in a comprehensive win for the hosts.

As seen below, they decided to commemorate one of their biggest victories in the competition on Instagram much to the delight of their own supporters, but it eventually managed to find the attention of Besiktas fans who flooded the comments section with ‘Goodbye Liverpool’.

It left many confused as to what the response was all about, but it turns out it was a now infamous bit of commentary from Turkish commentator Ercan Taner, who was assigned to the Europa League encounter between the two sides two years ago.

Liverpool were knocked out on penalties on that occasion, and ‘Goodbye Liverpool’ was what he managed to get out as he was left stunned when Dejan Lovren missed the decisive spot-kick, as noted by The Mirror.

So, all in all it was very classy from the Turks as they could have easily got the hump with the embarrassing result, but full marks for the response as they engaged in a bit of light-hearted banter on a Tuesday morning. 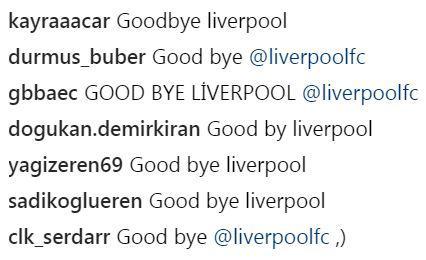