Premier League clubs have been tracked to see how much distance they’ve covered during games so far this season, and Man Utd are statistically bottom of the standings.

Depending on how these statistics are interpreted, there are positive and negative analytic points that can be taken from them.

On one hand, Man Utd have covered 1162km so far this season, which is the lowest total of all 20 teams. However, does that make them the ‘laziest’ as suggested in the graphic below from The Sun, or does that merely mean they’re the most organised and don’t need to cover as much ground as the rest?

The Premier League table would suggest that it’s the latter as they remain in second place in the standings but this is where the statistics muddy the waters if you like, as Tottenham, who are also on 23 points after 11 games, came in at third place with a total of 1245km.

Mauricio Pochettino’s side is known for their pressing and energetic style of play which could be their downfall as we get to the latter stages of the season, but ultimately it’s working for them so far.

The rest of the top clubs are loitering in mid-table as seen below, but naturally the focus has been on United’s stats and whether anything can be drawn from them.

Arguably the other biggest surprise is that Liverpool sit in 11th place with a total of 1217km. Given their reputation as a high-pressing and tireless running side under Jurgen Klopp, you’d expect that figure to be higher at a similar level to Tottenham, but as seen below, that’s not the case.

While it does offer some interesting insight, ultimately all that will matter come May is the actual Premier League standings and who sits where as all 20 teams go all out to reach their objectives. 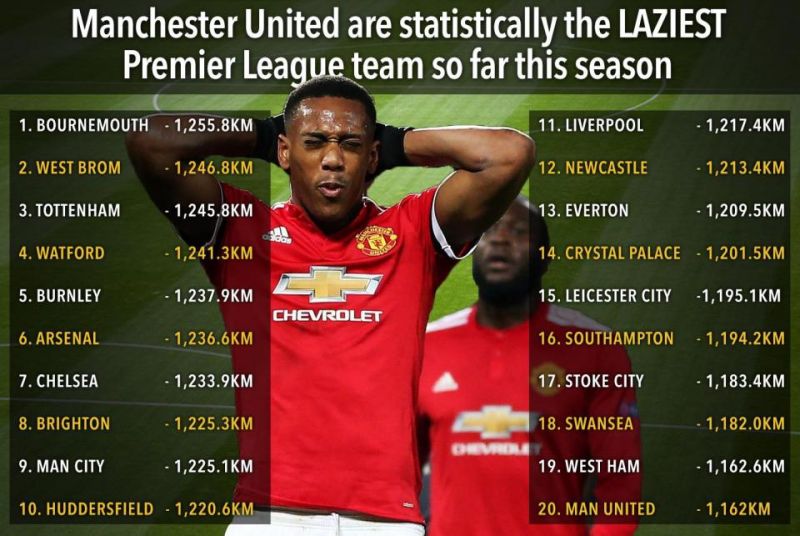