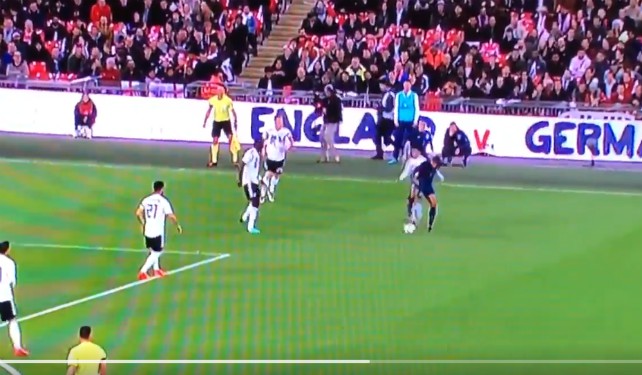 Ruben Loftus-Cheek may face a long and hard fight to get into the Chelsea team, but he’s made a real impression on his England debut tonight against Germany.

The 21-year-old midfielder, who is spending this season on loan at Crystal Palace, did not look overawed by the international stage, and pulled off a superb double nutmeg in the first half.

First, Loftus-Cheek back-heeled the ball through the legs of Manchester City’s Leroy Sane, and immediately followed it up with another nutmeg on defender Marcel Halstenberg.

Needless to say, plenty of tweeters were impressed with the youngster…

That’s is disgusting from RLC pic.twitter.com/7hUTT9H3rX

England are so boring to watch.. Only entertaining player for them is Loftus-Cheek.

Loftus-Cheek will be hoping Antonio Conte was watching, with Chelsea not having the best track record in recent years of handing opportunities to their academy players.

Another Blues loanee, Tammy Abraham, has also been handed his England debut tonight after impressing on loan at Swansea City this season.

Can the pair prove an unlikely pair of heroes for England ahead of next summer’s World Cup? Loftus-Cheek certainly seems up for it, at least.