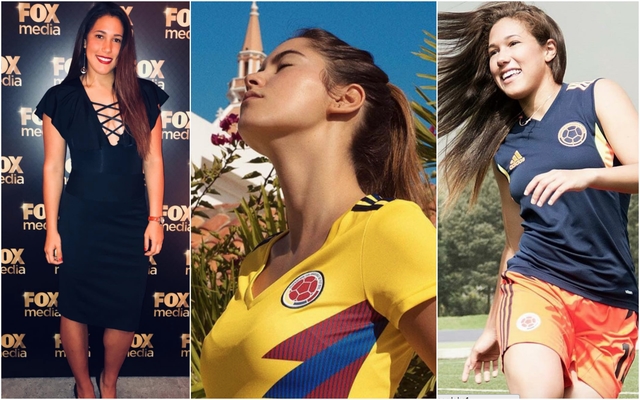 After James Rodriguez was used to model the Colombia men’s side’s new jersey, you’d expect Adidas to use one of the women from the female team to promote their version right?

Well that’s not what happened as they instead opted to use former Miss Colombia and Miss Universe stunner Paulina Vega Dieppa, as seen in the image below, and goalkeeper Vanessa Cordoba was not impressed.

Having expressed her dissatisfaction with the decision to use Dieppa rather than a member of the women’s team which has incidentally performed very well in recent tournaments, she took to Instagram to show her love for the feedback and support that she has received since standing up and publicly criticising the decision.

“MANY THANKS to all the people who have become involved in this opinion on the new shirt of the Colombian Soccer Team.

“It has been an enriching experience to be able to read and listen to different points of view. My only feeling towards the women of our country and the rest of the world (athletes or not) is respect and admiration because we are in this together. I am happy to have been able to give visibility to the subject and I hope that everyone contributing with a grain of sand can shape our society. We use that shirt for the love of our country so let’s make it represent UNION, EQUALITY and EQUITY!”

Having also received support from the men’s team’s official account on Twitter, it remains to be seen what Adidas do in order to appease the anger created, but Cordoba has certainly made her desired impact it seems!