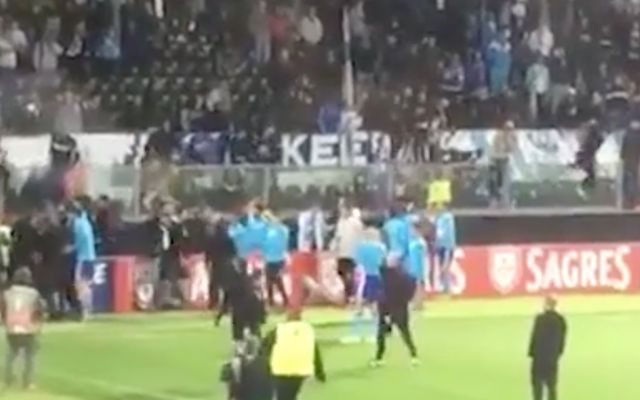 Patrice Evra has been banned for seven months from all UEFA competitions and released by his club Marseille after recently kicking one of his own fans before the start of a game.

The former Manchester United defender was one of the top left-backs in Europe on his day when he won a host of major honours in a eight-year spell at Old Trafford.

However, Evra lashed out at one of his own supporters before a recent Europa League game and now seems to have sealed the end of his time with the Ligue 1 club.

The 36-year-old only joined Marseille from Juventus last season, but his future in the game will surely now be in doubt as he finds himself without a club and unable to play until next summer.

Patrice Evra does an Eric Cantona and kicks a fan!

He’s become the first player in Europa League history to be sent off before kickoff ? pic.twitter.com/qVOStgfscX

Given Evra’s age and situation, it would not be surprising if this were the end of the player’s top-level career.

If so, it would be somewhat reminiscent of the way the legendary Zinedine Zidane also bowed out in disgrace as he was sent off for a headbutt on Marco Materazzi in his final game before retirement.