It’s been four years since Thiago Alcantara left Barcelona for Bayern Munich, but he has now left the door open for a future return.

The 26-year-old joined the Bavarian giants at a time when Pep Guardiola was in charge and it has proven to be a fruitful stint given he’s won four Bundesliga titles as well as domestic cups and the FIFA Club World Cup in 2013.

However, it all began for him at Barcelona, where he made 101 appearances despite still being so young, as he enjoyed the taste of success early on with four La Liga titles and the Champions League in 2011. 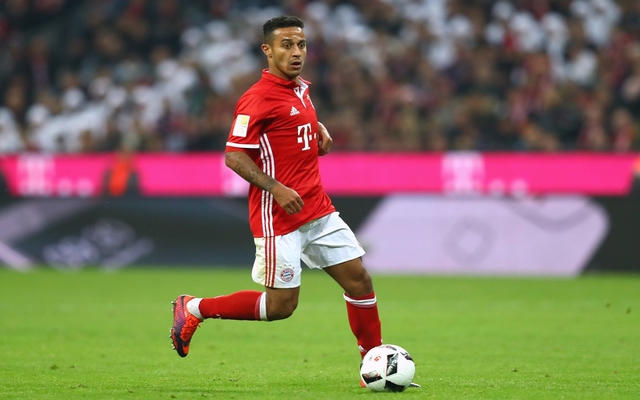 Will Thiago seal a return to Barcelona in the future?

Having moved to Barca in 2005 to join their youth ranks before making the grade at senior level, it’s no surprise that Thiago holds the Catalan giants and the city close to his heart, and in turn he has suggested that he would be open to the idea of a return further down the line.

“Barcelona will always be my home, not just because I love the club, but also the city,” he told Catalunya Radio.

“I will always look at it with affection. You never know if I will return because I am really happy at Bayern, but football changes a lot. Anything can happen.”

The Spanish international remains a pivotal figure at Bayern, making 14 appearances in all competitions so far this season, but ultimately he’s right in that things can change very quickly in football.

While he was keen to reiterate that he’s happy in Germany and remains under contract with the Bundesliga champions until 2021, the possibility of a return to Barcelona could sway him as Ernesto Valverde’s side continue to impress this season.

As evidenced in their summer recruitment drive though with the likes of Ousmane Dembele and Nelson Semedo joining, they’re looking to lower the average age of the squad where possible and Thiago still has a long way to go in his career.