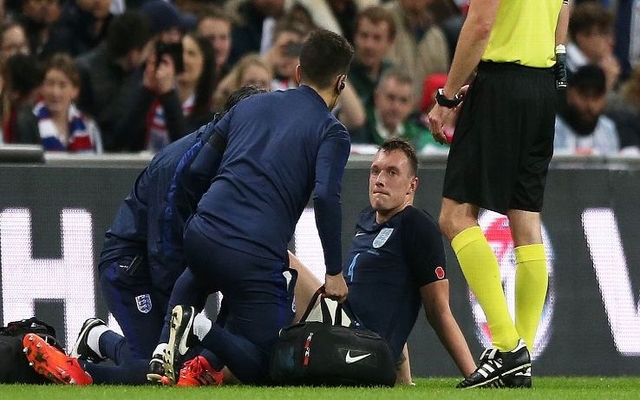 After bidding his players farewell for the international break, the last thing that Man Utd boss Jose Mourinho would have wanted was a fresh injury concern.

Unfortunately for the Portuguese tactician, that’s exactly what he’s got after defender Phil Jones lasted just 25 minutes in England’s goalless draw with Germany at Wembley on Friday night.

With his thigh already heavily strapped, it appeared as though the Man Utd star aggravated something, and as per the official FA site, they’ve confirmed that the 25-year-old has returned to Manchester to receive further treatment having been ruled out of the international friendly with Brazil next week.

It’s confirmed that it is the thigh problem that has sidelined him, and so Man Utd will now scramble to give him the treatment required to be in with a chance of featuring against Newcastle United on November 18 in their first game back after the break.

Jones has been crucial in the Man Utd defence

Jones has played in all 11 Premier League games so far this season as he has established himself as a key figure in Mourinho’s backline, with United boasting the best defensive record in the top flight with just five goals conceded.

However, this isn’t the first time in recent weeks that the England international has sustained an injury problem as he was forced off in the first-half in the defeat to Huddersfield Town last month and so this could be an on-going concern for Man Utd and Mourinho.

Nevertheless, they’ll surely be happier with the fact that England have sent him back so the club can now look after him rather than keep him around and risk making the injury worse. Time will tell whether or not the issue forces Jones to miss playing time as United have a number of key fixtures coming up both domestically and with the conclusion of the Champions League group stage.