Interest is reportedly building in Liverpool midfielder Emre Can ahead of him becoming a free agent next summer when his current contract expires.

The 23-year-old has been at Anfield since 2014, and has improved and matured significantly during his spell at Anfield where he has been a regular the last three seasons having made 40+ appearances in each campaign.

In turn, given his progression coupled with the amount of room for improvement that he still has, Liverpool will be keen to continue to try and reach an agreement on new terms, but with just seven months to go on his current deal, it’s surely a growing concern for the hierarchy and supporters.

According to The Sun, interest from elsewhere in Europe won’t help, with Borussia Dortmund now said to have joined the race for his signature along with Manchester City and Juventus. 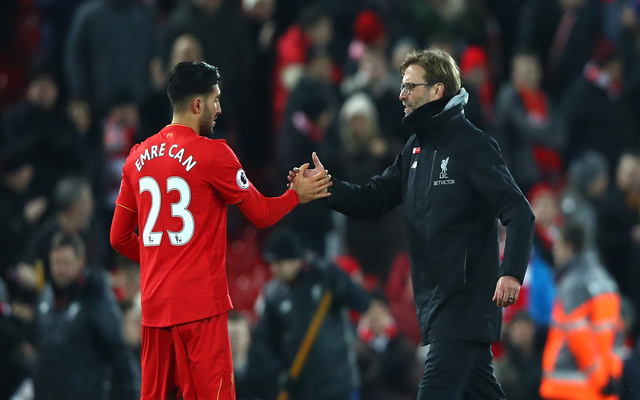 The German international will be a superb signing on a free transfer, and that is seemingly being reflected in the calibre of teams showing interest in him, while it’s a surprise at this stage that more clubs haven’t been linked with a swoop at the end of the season.

It’s noted though that one stumbling block could be his £150,000-a-week wage demands, which arguably could put big-spending City at the front of the queue as they’ve shown with their spending in transfer windows in recent years that it shouldn’t be too much of a problem.

However, it will also come down to whether or not the club value Can that highly to put him in that wage bracket, and so it remains to be seen who can reach an agreement on terms with the German international and prise him away from Liverpool.

Can will be allowed to discuss terms with other clubs from February onwards as per transfer rules, and so the longer the wait goes on for Liverpool fans to see him ink a new deal, the more concern they’ll have over losing a key figure in the squad on a free transfer.