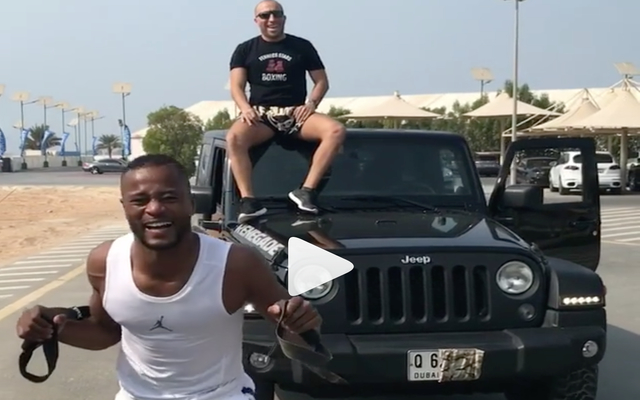 It’s been a tumultuous fortnight for Patrice Evra, as after kicking a Marseille fan prior to a Europa League game, he was duly sacked by the Ligue 1 club.

In turn, the former Monaco, Manchester United and Juventus defender is now a free agent and at 36 years of age, he’d be forgiven for having concerns over his next step having also been hit with a ban.

However, it seems as though no matter what life throws at the former French international, he’s going to take it in his stride and keep smiling, as evidenced in this video on Instagram.

As he finally opted to break his silence following the controversial moment which landed him in hot water, Evra is on holiday but is still working hard as he was filmed pulling a car with a fella sat on top of it just for good measure.

Further, we were all treated to that infectious laugh and a motivational speech as it seems Evra remains in high spirits and will continue to work on his fitness in a bid to earn a move elsewhere when he’s allowed to return to action. Can’t wait to have you back Patrice, although it looks like you’re not going anywhere on Instagram in the meantime…

I just feel blessed ??happy #monday don’t be lazy ? why you have to worry when you got the support and the strength from soo many human beings????? thank you soo much Keep smiling only positive energy on Patrice Instagram I love this game hahahaahah special thanks @coachmeddydubai and Spielberg aka @nicolasanelka_official #ilovethisgame #positivevibes #love @beapandaofficial #motivation #future #car