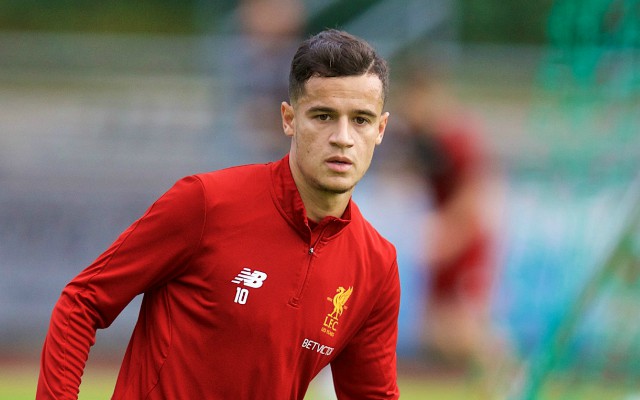 Barcelona are reportedly so confident of signing Liverpool’s Philippe Coutinho in the January transfer window that they’ve already put together his contract.

The Catalan giants are prepared to make the Brazil international their second highest earner, behind only Lionel Messi and slightly ahead of former Liverpool team-mate Luis Suarez, according to Don Balon.

Barca tried three times to sign Coutinho in the summer, BBC Sport claimed at the time, but Don Balon suggest they’re now increasingly sure they’ll finally get him in January.

This would be a major blow for Liverpool, who have not enjoyed the best of starts to this campaign, despite keeping hold of Coutinho.

The Merseyside giants are already 12 points behind Manchester City in the title race, with a top four spot surely the best they can hope for this season.

On top of that, The Times report that Emre Can is another big name who could be on his way out of Anfield in the near future, with the Germany international unlikely to sign a new contract as he looks like becoming a free agent next summer.

Emre Can could be another Liverpool star heading for a transfer

Losing Coutinho and Can in the space of a few months would be a nightmare for Reds fans, who have had to deal with a number of high-profile departures down the years.

Suarez is one of the most recent, moving to Barcelona in 2014, while Raheem Sterling was then poached by Manchester City the following year.

Fernando Torres, Xabi Alonso and Javier Mascherano are other big names to be snapped up by bigger clubs in recent years.