Man Utd defender Phil Jones has had his injury problems in recent weeks, and it’s reported that Jose Mourinho is far from impressed with England’s handling of him.

The 25-year-old recently broke down for United in their defeat away at Huddersfield last month but recovered to take his place back in the side the following week.

However, after going away on international duty, he aggravated the problem against Germany and lasted just 25 minutes before having to be replaced with his thigh already heavily strapped.

The Sun report that Mourinho isn’t fuming over the fact that Jones played in the game, but at the suggestion that the England medical staff gave the defender six injections to take part in the first place. 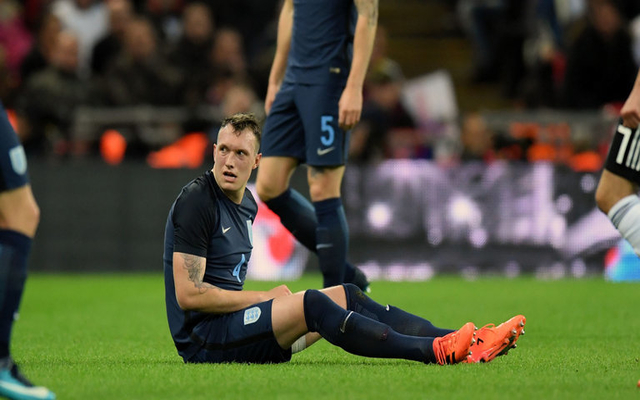 “I’ve been a manager since 2000 and in 17 years I’ve never had one single player who had injections of an anaesthetic to play a friendly. Never. Never.”

It’s evidently going to irk Mourinho as ultimately he now risks being without a key figure in his team for the next three weeks, as per the report.

United have conceded just five goals in 11 Premier League games so far this season, and Jones has been a crucial part of that impressive record as he has been an ever-present for the Red Devils.

In fact, two of those five goals were conceded when he was off the pitch after picking up an injury in the first-half of the defeat away at Huddersfield, and so losing him will be a major blow in terms of keeping things tight at the back.

Mourinho also took the opportunity to have a pop at those who withdrew from the England squad last week with an injury problem, but seemingly will make a miraculous recovery to feature for their respective clubs this weekend after skipping the friendlies for England.

In truth though, he’s probably seen the same thing happen at clubs he’s been in charge of before so that aspect of his complaint surely isn’t anything new for him, but you can absolutely understand his frustration over Jones.