It was another eventful weekend in the Premier League, and BBC pundit Garth Crooks is back on a Monday with his ever-controversial team of the week.

In his defence, he’s picked a number of players that were more than worthy of recognition this time round, but ultimately, he’s still come in for criticism on social media.

One thing that shouldn’t surprise anyone though is a strong Arsenal contingent, following their 2-0 win over Tottenham in the north London derby on Saturday.

It was a dominate performance from the Gunners, and goalscorers Skhodran Mustafi and Alexis Sanchez get the nod from Crooks, as aside from finding the back of the net, they barely put a foot wrong in the game and were key to Arsene Wenger’s side getting all three points.

Mesut Ozil was also crucial as the German playmaker returned to form at the Emirates with a Man of the Match performance for Sky Sports, and Crooks rightly includes him here, albeit in a strange role on the left of a midfield four.

Meanwhile, Liverpool star Mohamed Salah took his tally to 14 goals in 18 games in all competitions with a brace in the win over Southampton as he continues to look like a brilliant signing for Jurgen Klopp.

In turn, it’s no surprise to see him included in the XI too, while Bournemouth’s hat-trick hero Callum Wilson and Chelsea’s Eden Hazard complete the attacking trident alongside Sanchez after key performances in wins for their respective sides.

Paul Pogba makes an immediate return to the team of the week after recovering from injury to play a crucial role in Man Utd’s win over Newcastle United, while Man City duo Vincent Kompany and Kevin De Bruyne get the nod as Pep Guardiola’s men march on at the top of the Premier League table.

Crooks gets stick for usually going with players from the top six sides and specifically those who have scored goals, but to his credit, he’s recognised that Heurelho Gomes and Christian Kabasele were key in Watford’s win over West Ham United on Sunday as Marco Silva continues to enjoy a brilliant start to life at Vicarage Road.

All in all, Garth has done a decent job this week, but ultimately it wouldn’t be right if he didn’t upset some people. And he has done, based on the tweets below, as he’s managed to sneak in a pop at Paul Pogba over his dance moves and haircut again, and it’s fair to say it didn’t go down well.. 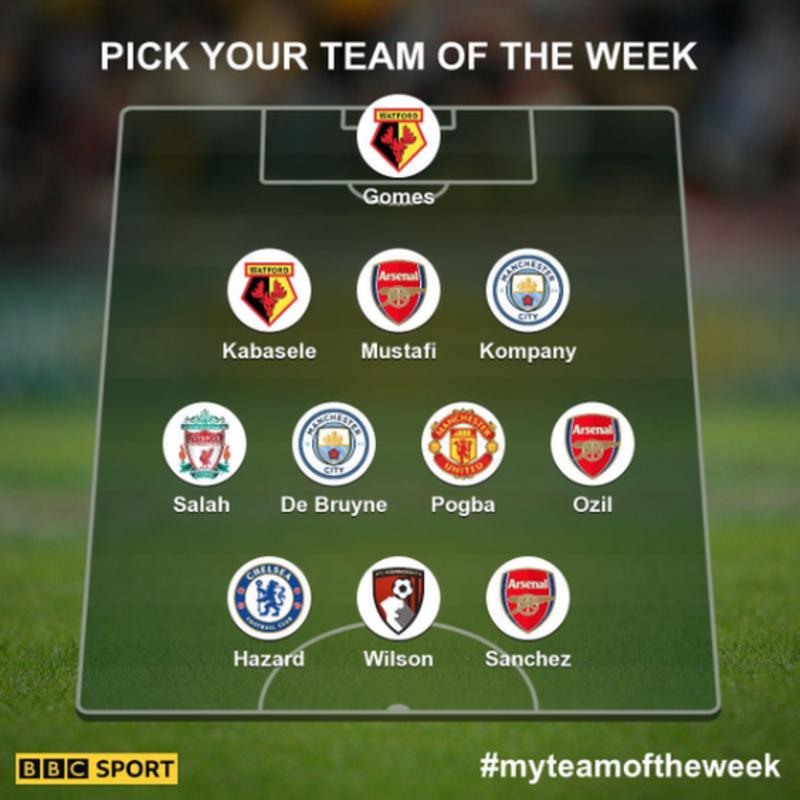 Are you the only idiots that would employ Garth Crooks? He’s “paid” to be an unbiased pundit yet acts like a petulant baby.

Now we know why he didnt pick Cork, he wanted a platform to yet again badmouth Pogba.

Football is also about expressing yourself, this isn’t golf Garth (reply to pogba part)

Garth claims he doesn’t have time for Pogba’s hairstyle and dance, yet he dedicated an entire paragraph in a previous column discussing it and spends his last paragraph here bringing it up again…you can’t make this stuff up