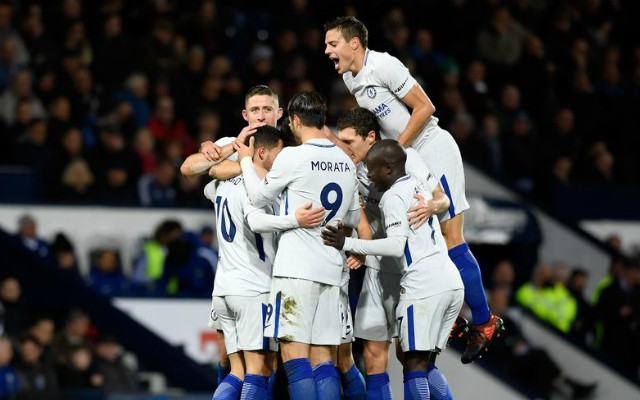 Chelsea strolled to a comfortable 4-0 win in the Champions League tonight as they thrashed ten-man Qarabag away from home to qualify for the knockout stages of the competition.

Eden Hazard opened the scoring from the penalty spot, with Willian appearing to go down a little easy to win the spot-kick and get Rashad Sadigov sent off.

Willian then made it 2-0 from a top class Hazard assist before half time, and Cesc Fabregas made sure of the points by scoring the third, also from a penalty in the 73rd minute.

Willian then produced a moment of real quality in the closing stages to make it 4-0 and add some gloss to the scoreline.

Willian’s contribution probably sees him edge Hazard on this occasion, though both were superb in Chelsea’s attack.

2 – Willian, who made his 200th appearance in all comps for Chelsea tonight, also scored twice in a Champions League game for the Blues for the first time. Celebration. pic.twitter.com/VmzsqiLiWB

While the Brazilian has not always been a regular in Antonio Conte’s side this term, he’s shown his worth with his performance tonight.

As well as his goals, Willian won both penalties and put in the kind of effort we’ve come to associate with him, in what will surely give his manager a bit of a headache about sticking with the 3-5-2 formation that does not really accommodate his talents.

Although he looked a little unlucky, Rashad Sadygov put Qarabag in a difficult situation early on as he charged in on Willian to concede a penalty.

In the process he also got himself sent off and gave his side next to no chance when they’d actually started fairly well.

1 – Eden Hazard has both scored and assisted in a single Champions League game for the first time in his career. Schemer. pic.twitter.com/6qVnSRP0NR

And, secondly, one that is very, very easy to believe, though no less impressive…

As ever, Chelsea fans were full of praise for Hazard, who ran the show again tonight despite playing a slightly unfamiliar false 9 role…

Eden Hazard has directly contributed to 12 goals in his last 10 games for club and country.

Some, however, were a little peeved at Alvaro Morata’s poor finishing when he came on…

In the end, Morata was so poor (as a sub) and Willian ended up being man of the match. Congrats to Chelsea on qualifying to the next Champions League round.