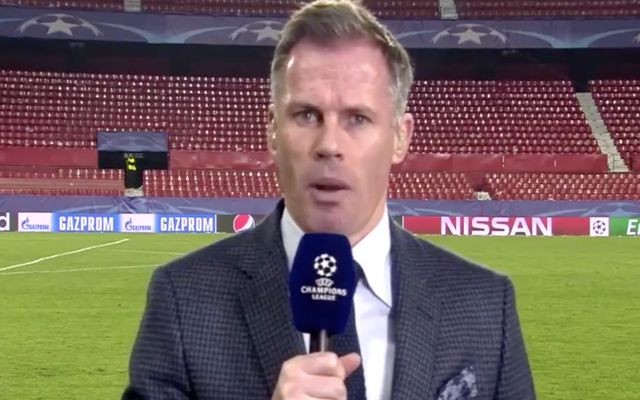 Like any Liverpool supporter, Jamie Carragher was left bitterly disappointed with Jurgen Klopp’s men after their capitulation against Sevilla on Tuesday night.

From holding a commanding 3-0 lead, the Reds managed to throw it away in the second half as the hosts came storming back to claim a point and postpone Liverpool’s celebrations of qualifying for the knockout stage of the Champions League.

While speaking to Norwegian TV, Carragher jokingly started his match analysis by suggesting that he would like to swear, but ultimately it didn’t hide his disappointment with what he saw unfold in the second half.

The former Reds defender likened the way Jurgen Klopp’s side played after the break to ‘watching children play’ as he was shocked by the lack of match intelligence that they showed to see out the game and hold on to the victory.

With their defensive problems coming back to the fore, it remains to be seen how Klopp deals with it as his side have looked a lot more solid at the back in recent outings and had finally started to quell the criticism.

However, based on this assessment from Carragher, it’s not just about individual or collective defensive quality, it’s a mental thing that he’s questioned too…

.@Carra23: – Thankfully I’m not allowed to swear also, because I’d like to swear when I see that second half.