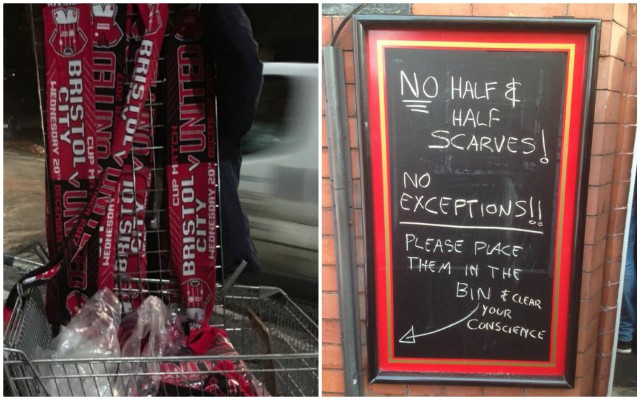 Half and half scarfs are the Marmite of modern football.

You either stay well clear because they make you physically sick… or you’re openminded enough to buy one once, only to chuck it to the back of your cupboard forever.

Old-fashioned football fans hate them. They associate the scarves with the death of football rivalry – after all, how can a Liverpool fan truly hate Manchester United if he or she is prepared to wear a Red Devils emblem?

There was another miniature eruption of fury this week when a vendor – operating out of a shopping trolly near Ashton Gate – was seen selling United and Bristol City half and halves a full month before the two clubs meet in the League Cup.

One Twitter user shared an image of said trolly, along with the message: “Meanwhile down at Ashton Gate. Half and half City & United scarfs. Fu*k right off!!”

Although half and half scarves are becoming more and more widespread, they are noticeably more popular at United games.

Journalist Charlie Skillen explained in a recent Ball Street documentary: “Old Trafford is seen as a hotbed for half and half scarves because it is a hotbed for tourism.

“The stereotype of the day tripper to Old Trafford is one that has been held by football fans all over the country for probably more than 20 years.

Despite widespread negativity, the appeal of these monstrous garments is clear – they serve as a memento of an occasion.

People used to collect ticket stubs, but tickets are being phased out. Some still collect programmes, but these are now just full of information you can read for free online. 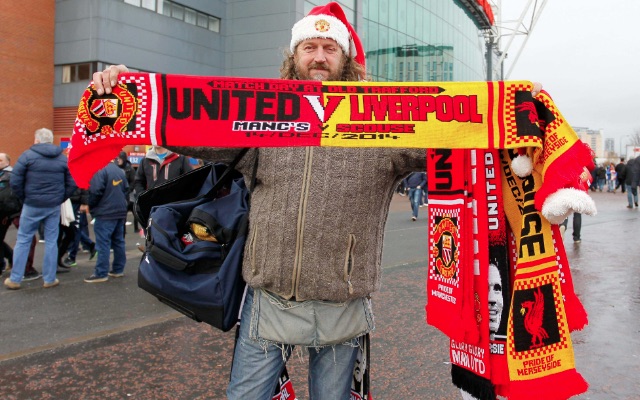 Old Trafford is seen as a hotbed for half and half scarves. Man United and Liverpool combo scarves were seen on sale there in December 2014 and have been at every game between the two rivals since

As controversial as they are, there is no doubt a gap in the market for half and half scarves.

However, even the biggest defender of half and halves would surely agree that a Craig Shakespeare and Tony Pulis combo was a step too far.

Both managers have been sacked since this monstrosity went on sale during Leicester v West Brom in October. Coincidence?

Craig Shakespeare and Tony Pulis half and half scarfs were available before Leicester City v West Bromwich Albion in October this season… presumably many were still available well after the game too! Both managers have since left their jobs