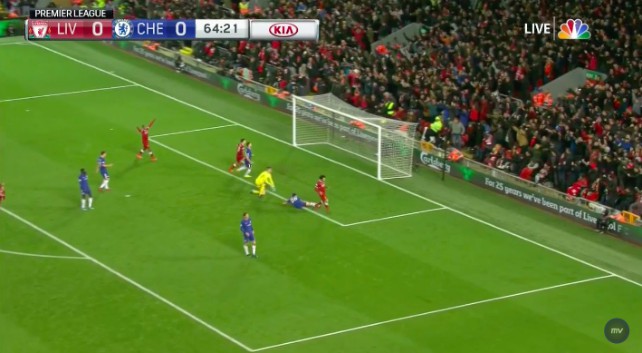 Liverpool went 1-0 up against Chelsea thanks to a Mohamed Salah goal against his former club, though he chose not to celebrate the moment, much to the confusion of some fans on Twitter.

The Egypt international has been a big hit at Anfield since his summer move from Roma, and is now on an incredible ten Premier League goals for the season from out wide.

Salah was played in with a smart pass by Alex Oxlade-Chamberlain, and had the easy task of sliding it past Thibaut Courtois in the Chelsea goal to give the Reds the advantage.

This could end up being a crucial goal in the race for a top four spot, whilst also further denting Chelsea’s hopes of retaining their title.

Still, Liverpool fans have more pressing things on their mind and are in some disagreement over why Salah chose not to celebrate.

While some are disappointed he didn’t rub it in against his sold club, some are suggesting his celebration was muted in respect for the victims of the terrorist attack in Egypt yesterday.

Not sure why Salah didn’t celebrate, it’s not like he owes Chelsea anything or they treated him well

I suspect that Salah’s reluctance to celebrate is to do with the recent terror attack in Egypt.

A lot of people are going to be deleting tweets if Salah comes out after the match and says his decision not to celebrate was related to the attack in Egypt, and had nothing to do with Chelsea.

Just BTW PEOPLE, Salah did not celebrate because Egypt, NOT Chelsea.