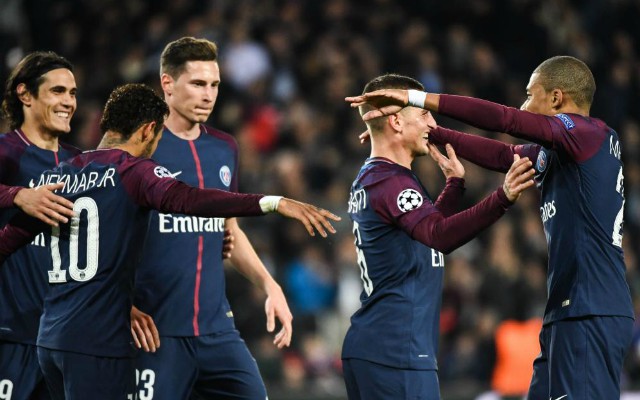 PSG defender Marquinhos has made the surprise claim that he finds Julian Draxler more technically impressive than ‘the three greats’ – Neymar, Lionel Messi and Cristiano Ronaldo.

The Germany international has been recently linked by the Daily Mirror as a top transfer target for Arsenal and Liverpool as his future at the Parc des Princes looks in some doubt.

Despite impressing since joining last season, Draxler has had to adapt to playing a deeper role this season due to the presence of summer signings Neymar and Kylian Mbappe up front.

Still, in a little dig at his fellow countryman Neymar, Marquinhos says he actually feels Draxler is the player he’s been wowed by most in his career.

‘I played against the three greats – Cristiano Ronaldo, Messi and Neymar – but in pure technique Draxler impressed me the most,’ Marquinhos told JDD.

Good to see Draxler warming up for his January move to Arsenal pic.twitter.com/cx1lp3qg3E

‘And even if he does not have the speed of the three, he eliminates the opponents on his control, his touch of ball, his intelligence of play.’

This is quite the statement from Marquinhos, and encouraging news for Arsenal and Liverpool fans if the Mirror’s report that they’re in for him are accurate.

Long regarded as a promising talent, Draxler’s career seemed to stall somewhat in the Bundesliga before he left Wolfsburg for PSG.

The 24-year-old certainly looks like he could be a good fit at Arsenal or Liverpool right now, with both sides having their own issues in attack.

Alexis Sanchez and Mesut Ozil are heading towards the ends of their contracts at the Emirates Stadium, while Mundo Deportivo continue to link Liverpool’s Coutinho to Barcelona.