Manchester City have made Premier League history after the best-ever start to a campaign in terms of points following their 2-1 victory at Huddersfield Town yesterday.

Pep Guardiola’s side now have an incredible 37 points from their first 13 matches of the season – more than any side has ever managed by this stage in a Premier League season.

This unstoppable-looking City outfit showed resilience as well as quality this Sunday as they fought from 1-0 down to claim a hard-fought three points, and will now have their sights set on breaking superb records held by Arsenal and Chelsea.

City are currently on a run of 11 league wins in a row, meaning they can surpass Arsenal’s record of 14 with just four more wins in the top flight, which does not seem beyond them by any means at this stage.

37 – Manchester City have won 37 points from their 13 matches this season – the best-ever points total at this stage of a @premierleague campaign. Elect? pic.twitter.com/bWKioWRZIZ

The Sky Blues have some winnable-looking fixtures coming up, taking on Southampton, West Ham, Manchester United and Swansea City in their next four league games, though of course United will be a stern test.

City could also be in with a chance of overtaking Chelsea for successive away wins in the league, with Guardiola’s side currently on eight and the reigning Premier League champions on 11.

City are the only unbeaten team in the country this season, and as time goes on more and more pundits will start to wonder if they can replicate that famous Arsenal side of 2003/04 that went the whole campaign without a single league defeat. 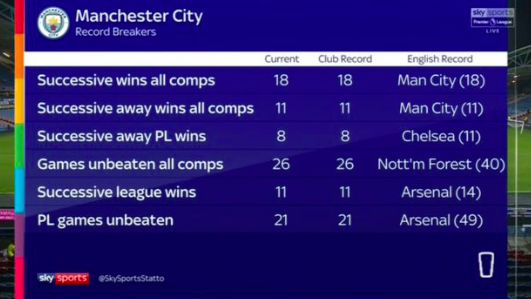 There’s still a long way to go for City in that respect, however, and they would need to go unbeaten for a further 29 games to overtake the Gunners’ all-time unbeaten record in the league of 49 matches.

Barring a total collapse, however, it looks increasingly clear that Guardiola has put together a very special City side indeed this season.